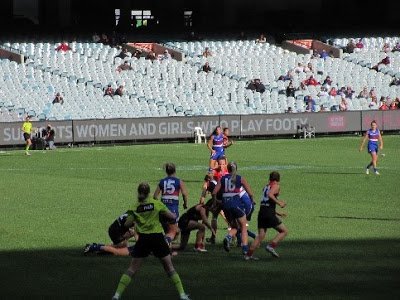 The Demons and the Western Bulldogs faced off at the Melbourne Cricket Ground in the Women's Australian Football League match this week. (Alyce Collett/YJI)
MELBOURNE, Australia – This week marked an important first step toward national Australian Rules football competition for women, with the first of two matches this year
between teams made up of the best 50 female players in the country.
The rules and regulations of these matches are no different from a men’s game of Australian Rules, but women playing Aussie Rules at the top level is unfortunately a new concept – the first women’s exhibition match was in 2013.
Sunday’s hotly contested match at the Melbourne Cricket Ground was the third annual Women’s Australian Football League match, pitting two teams connected to the Australian Football League, Melbourne’s team, the Demons – known as the Dees – and the Western Bulldogs.
Melbourne Football Club managed to hang on for an eight-point victory in what was a tight affair. 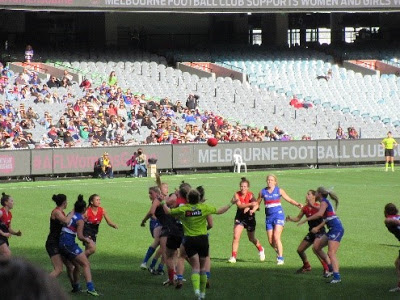 The Bulldogs did manage to register the first goal on the board through midfielder Darcy Vescio, but then the Demons hit back with three goals to take a 13-point lead at quarter time.
The Bulldogs kept the Dees goalless for the middle two quarters, but only added two goals to their tally.
The Dees were costly in front of goal. They had plenty of shots on goal, but only managed to register 11 behinds across the second and third quarter.
Under Aussie rules, there are a couple of different ways to score points. A ‘behind’ is worth a single point and a goal is worth six.
The Bulldogs managed to peg the margin back to three points late in the final term, but a late goal to Melbourne forward Kira Philips sealed the win for Melbourne.
Melbourne midfielder Kara Donnellan was judged the best on ground for her overall performance and specifically her 23 disposals, which means she kicked or handballed the ball to her team’s advantage.
Melbourne captain Daisy Pearce, who is also a midfielder, also had 23 disposals and shone around the ground.
The only negative for Melbourne were injuries to midfielders Cecilia McIntosh and Ellie Blackburn. McIntosh left the field early after injuring her knee and did not return to the field, while Ellie Blackburn hurt her ankle late in the match.
The initial goal, to have a national Australian Rules Football league for women by 2020, has been revised to a more ambitious target of 2017.
With many thousands of women and girls playing Australian Rules across the country, many see this target as a good possibility.
Alyce Collett is a Junior Reporter for Youth Journalism International.
MELBOURNE                  3.3  3.8 3.11  4.13 (37)
WESTERN BULLDOGS  1.2 2.3  3.4   4.5 (29)
GOALS
Melbourne: T. Harris, E. Swanson, K. Bowers, K. Phillips
Western Bulldogs: D. Vescio 2, M Hope 2
BEST
Melbourne: K. Donnellan, E. Swanson,
E. Blackburn, D. Pearce, K. Bentley, K. Bowers
Western Bulldogs: K. Brennan, M. Hope, H. Anderson, M. Hutchins, D. Vescio, S. Chiocci 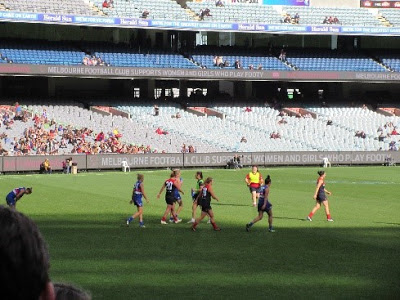 The Demons and the Western Bulldogs faced off on Sunday at the Melbourne Cricket Ground. (Alyce Collett/YJI)

***
Your tax-deductible contribution can help support Alyce Collett
and other students at this nonprofit at:
www.HelpYJI.org