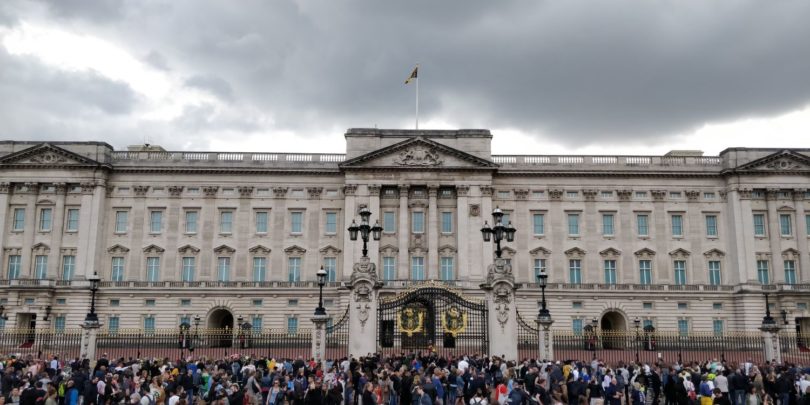 A crowed gathered outside the gates of Buckingham Palace Friday. (Sam Cohen/YJI)

LONDON – At the gates of Buckingham Palace, a Syrian refugee held a bouquet of flowers above his head, embellished with a photograph of the late Queen. There were tears in his eyes.

A resident on this island for only eight months, he didn’t want to give his name, but he spoke passionately of the queen.

That is the true impact of the monarchy and of Queen Elizabeth herself. She stood as the figurehead, at the helm of our nation for a reign spanning more than seven decades.

In that time, she came to symbolize Britain. She was the bridge between old and new, the glue fixing convention to modernity, the symbol of an institution which is secure and timeless in the face of political clashes.

Traditions – like the monarchy – are akin to fairy tales. Taken at face value, they seem blatantly fatuous – the fanciful material of child’s play.

Yet, in the context of their enduring nature, there appears something mysterious and deeper than that which we may disparage, at first, as useless.

For the United Kingdom, perhaps our greatest fairy tale is that of The Monarchy. Complete with helpings of pompous grandeur and pageantry, it has its many detractors.

But irrespective of political persuasion, the death of Queen Elizabeth II will grind our lives to a solemn halt.

She stood, personally, as an indelible mark of Britain and its 20th century past. A queen who, by virtue of her longevity, witnessed the most rapid changes undergone in the course of human history.

She saw a world war, revolution, social reform, the moon landing, decolonization, natural disasters, the rise and fall of the Berlin wall and the advent of the internet.

Her life was dense with change.

The mother of the nation and our head of state for 70 years, her reign was not spared of controversy. At times, the relationship was fraught. Too often, for some, she seemed distantly concealed in her ivory towers.

Of course, we grappled with the mutual bond between institution and people. But, as the final chapter is written, with every t crossed and every i dotted, the story of Elizabeth II will be a popular one.

The incalculable vagaries of the world bring fleeting moments of ecstasy and equally intense periods of sorrow. The ebbs and flows take us all with them and life is always in flux, never still.

At times, the future looked bright. At others, the clouds seemed to draw in. The kinks along the road may sway in the form of political division, social unrest and economic disaster, or sporting triumph and cultural jubilance.

Whatever the furor of our day-to-day existence, the Crown is constant.

A storied institution of myths, majesty, stoicism, and service, it makes no rational sense to endow an individual with such status. Why ought we genuflect at the altar of hereditary monarchy? Well, those are the shortcomings of the rational – it omits that which is human, unscientific, and founded in emotion.

The monarchy is a humbling thing. A reminder that none of us, alone, is bigger than the whole. It supersedes our factional conflict and brings our individual lives into the context of our society. It’s an institution which stands, in the words of Labour leader Keir Starmer, “not for what the nation fought over, but what it agreed upon.”

At Buckingham Palace and the other royal residences, the people continued to come. On foot, by train, from across the capital, the country and the world. As I joined the mass of people on the Victoria Memorial, I looked out across the sea of wellwishers. Some muttered unintelligible words to a companion, some took photos of themselves in the scenery of history, and others silently looked on at the gates of the Palace.

The mood is of somber comfort – the comfort of community. As I looked around, it was hard not to feel some relation to the anonymous faces.

What links us all? I couldn’t say. No doubt, each person feels something different to the emotions of the fellow beside them. Disparate experiences. Opposing partisan views. Diverse races and backgrounds. A spectrum of temperaments. Vast age gaps.

We are all the summation of individuality and expression. Yet, for today, and the weeks to come, something core is binding Britain together.

Nationhood like this is complex. It exists not on a piece of paper or even in the fabric of a flag. Insofar as one can quantify such a notional experience, there appears a tangible affinity in the air.

Like love, nationhood is abstract; just because you can’t touch it, that doesn’t render it fictitious.

The end of Queen Elizabeth’s life begins a new fairy tale in our national story, one that will be defined on new terms.

Right now, however, Britain and the world reflect on the downing of an Elizabethan sun. It shone in the background of our lives for all that most of us can remember.

And its faint glow, beyond the horizon, will continue to remind us of our common bonds to history, the world, and each other.

Sam Cohen is a Junior Reporter with Youth Journalism International.

Sam Cohen is a Junior Reporter with Youth Journalism International from London.