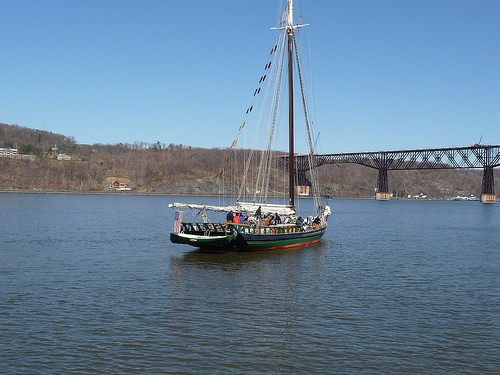 The Clearwater heads out onto the Hudson River. (Photo provided)

The captain of a Hudson River sloop built to raise environmental awareness – the brainchild of folk singer Pete Seeger – said the once badly polluted river “looks better to me” these days.
“This amazing old boat” has done a lot to promote clean water and to help convince people to love the river since its launch in 1969, Capt. Samantha Heyman said. 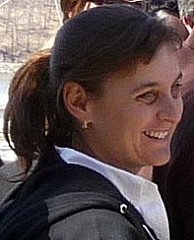 The boat, named the Clearwater, sails with anything from a fidgety fourth-grade class to a 50th wedding anniversary. However “our primary program, our bread and butter, is called classroom of the waves,” said Heyman.
“Classroom of the waves” and other programs have made it so that “half a million students have sailed on the Clearwater since she started” in patrolling the river 40 years ago Heyman said.
To honor Seeger’s 90th birthday tonight, musicians ranging from Bruce Springsteen to Joan Baez are playing a benefit concert in New York City to help establish an endowment that would ensure the Clearwater has clear sailing for generations to come.
When the Clearwater first started sailing the Hudson, the water was “very, very polluted,” Heyman said.
That has changed, in part because of Seeger’s effort.
“You can actually swim in it now,” the captain said, and may be able to eat its fish safely in another decade or two.
Besides educating kids with its “hands-on, experiential learning,” the Clearwater helps to get the community involved. In the fights over the cleanup of PCBs in the Hudson River the Clearwater “rallied the citizenry to go to all the public hearings and all the public meetings,” the captain said.
“Clearwater is really about getting people involved,” she said.
Speaking of getting involved, how did Heyman get involved in sailing? It wasn’t the usual way. Heyman grew up in Boston and wanted to be a lawyer.
She went to Lehigh University in Pennsylvania and got a degree in political science. But, after graduation, she “got on a boat and that was that,” Heyman said.
Heyman’s been on board the Clearwater since signing on as a crew member in 1994. She started as an apprentice, then became a deckhand, then a mate, and finally, captain.
Her path was unusual, but not any more so than a famous singer starting a clean-up-the-Hudson campaign.
Seeger, the famous folk singer and avid environmentalist was inspired to create the Clearwater program, according to Heyman, because a friend was keeping his boat in the Caribbean where the water was cleaner even though he lived in New York.
Seeger thought that local people should use their local river, Clearwater’s captain said.
Heyman said that he wanted to find an old Hudson River cargo sloop in disrepair, but that he couldn’t find any of the mid-1800s vessels left.
So he built a 106-foot long, 108-foot tall sloop at a Maine shipyard starting in 1966 and named it the Clearwater.
Since its launch in 1969, the Clearwater has been working the Hudson.
Heyman is just along for the ride, executing her part to near perfection in Pete Seeger’s vision.
“One person can make a difference,” Heyman said.