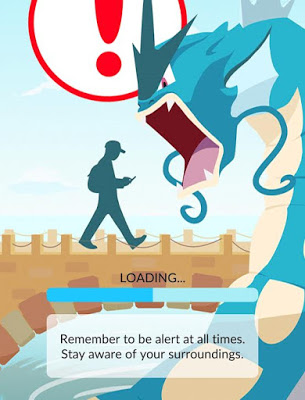 A screen shot from Jack Ward's phone of the Pokémon Go app loading, showing a safety warning the player to pay attention to the surroundings.
ARARAT, Victoria, Australia – The world went crazy a few weeks ago when Nintendo paired up with Niantic and released Pokémon Go.

The app, installed on millions of mobile phones, involves exploring the globe and catching animated creatures known as wild Pokémon.

Nintendo released the game in Australia, New Zealand and the United States on  July 6. It was then Germany’s turn on the 13th of July, followed by the UK the next day.
By the 17th of July, Pokémon Go was available in 28 countries and charting on the App Store in Australia. 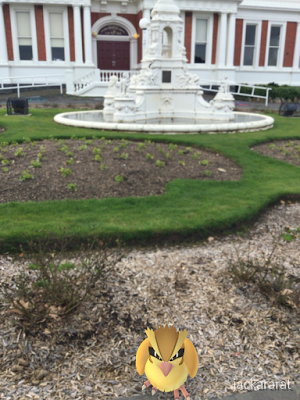 Lures can be placed at Poké Stops by users attracting Pokémon. (Jack Ward/YJI)

In the first few days after its release, there were a few problems and glitches with the game, which was expected, but it has improved with a few updates.

Now what is this whole fuss about, you may ask?
The aim of the game is to catch wild Pokémon around the globe. When walking through the real world – the game is supposed to also encourage people to get outdoors and exercise – the device being used vibrates and Pokémon pop up on the screen. That’s when it’s time to catch them.
Players catch the creatures by flicking a Poké ball at the Pokémon. It’s not as simple as all that. Sometimes they can be
quite hard to catch.
I spoke with some local students at Ararat College,
Gemma Millington, 15 and Tyson Makovec, 12, who attend Ararat College, play Pokémon Go.
“The game is good because you get to explore,” Millington said, adding that it is “a way to connect with other players.”

Makovec not only loves the game, but likes how he gets to exercise while having fun.

A screenshot from Jack Ward’s phone with the main screen of the Pokémon Go game showing the nearby features and any present Pokémon.

The main screen on the app is a real world map that shows current location and nearby PokéStops, where players can replenish their Poké balls, Gyms, where they can battle other players, and the location of near Pokémon and many other things.
Nintendo released a warning for the game saying, ‘for safety’s sake, never play Pokémon Go when you’re on your bike, driving a car, riding a hoverboard, or anything else where you should be paying attention, and of course never wander away from your parents or your group to catch a Pokémon.’
Even when loading the app, the game warns you to keep an eye on your surroundings.
People appear undeterred, though, and are still stepping out on the streets to try to find that one Pokémon they need.
So far the app has been a great hit. We will just have to see how long this latest craze lasts.
Jack Ward is a Junior Reporter for Youth Journalism International. 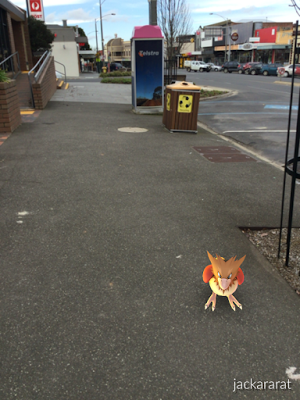 Players can find Pokémon anywhere, even near the phone booths and rubbish bins on the streets of your town. (Jack Ward/YJI)

***
Your tax-deductible contribution helps students
supported by this non-profit organization.
Thank you for being generous!
HelpYJI.org