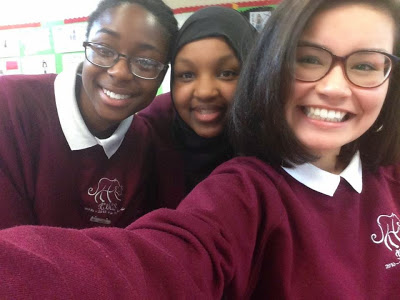 Year 11 pupils at Kings Norton Girls' School took pictures to remember each other by. Left to right are Lauren Pope, Fatima Bahoudashi are Ingrid O'Keeffe.

BIRMINGHAM, United Kingdom – While many people in Britain spent their morning Thursday deciding which polling station to go to, year 11’s at Kings Norton Girls’ School prepared for their very last day in school uniform.

Putting on my school uniform for the last time had no significant effect on me. After all, I’d only been wearing it for less than a year, as the year 11’s at my school wear a different uniform to the rest of the school.

But thinking about leaving school did have an impact.

Not only were we bidding each other farewell, but also the teachers we have grown so close to over the years.

We all cleared out our lockers for the last time and say some final and some temporary goodbyes.

It’s strange to think that the path we’ve all been on together is suddenly going to diverge in so many different directions.

It is time to move from being the oldest in our secondary school, to the youngest in sixth form, which is an institution for 16-18 year olds – the final two years of secondary education before university. Students may attend if they wish to study Advanced Levels or alternatives, but it is not the only option but a possible next step in our education.None of us expected for our final days together to mean so much. We are all mature, well rounded girls, and the people we were five years ago are now shadows of our current selves.

As we all begin to embark on the next journey of our lives some of us will stay on at our current school in sixth form, while others will move on to new schools, colleges or even take apprenticeships. Either way, change is ahead.

Coming to the realization that the people you have spent the last five years with will no longer be in your day to day life is a difficult thought process to go through.

Many people reject the notion of change, and I can understand why. Of course we will keep our memories, but letting go of people – even just for a while – is not an easy task.

For some of us this is a sad goodbye, for others this time could not have come soon enough, and for us all this has been a long time coming.

Lauren Pope is a Reporter for Youth Journalism International.