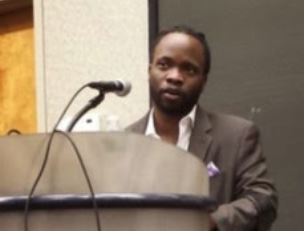 Hashim Garrett speaks at the Peace in Connecticut conference at Trinity College. (YJI)
HARTFORD, Connecticut, U.S.A. – Holding grudges seems to be a natural talent for many people, and sometimes it seems reasonable. Imagine how justifiable it must seem to hold a grudge against someone who shot you six times.
And yet, that’s not what Hashim Garrett did.

Garrett, who spoke at the Peace in Connecticut conference for nonviolence at Trinity College on Thursday, talked about the power of forgiveness.

Garrett’s story starts with his troubled home life in Brooklyn, New York. Growing up, he constantly saw the abuse his mother suffered at the hands of her boyfriends. This planted the seed of anger and hurt in him.
Then he became a victim of bullying. Without a father figure around to teach him how to stick up for himself, that seed started to blossom.
By the time he became a teenager, Garrett said, he was full of anger. At age 13 he joined a gang and his list of bad decisions grew. And at age 15, six bullets left him a paraplegic.
Garrett relived his trauma for the audience. When he first realized that he had been shot, he told us he’d felt no anger – just fear.
He pleaded with God.
Over and over again he said, “God, please don’t let me die.” This mantra, he said, brought him peace.
Garrett then described his out-of-body experience.

“All of the sudden I could feel my soul float out of my body,” he said, adding that all he could think at the time was, “I shoulda’ been a better person.”
It was during Garrett’s recovery that he found it in himself to forgive his attacker, but that did not come for a while.
When he first found out he was going to be paraplegic, he “was really consumed with revenge.” He wanted to kill the person who shot him, make him feel his pain, the pain of knowing he could never dance at prom or walk along a beach again.
But the examples of forgiveness in the Bible, given to him by his grandmother, helped him see the power of forgiveness.
“I chose to take the concept of forgiveness to heart,” said Garrett. “The only thing that gives me peace of mind is forgiveness.”
He talked about how forgiveness helped him with his recovery.
“Every time I look down at these braces and crutches, forgiveness helps me take the next step,” said Garrett.
He said he was able to forgive when he realized, “The kid who hurt me was just like me.”
Garrett said he knew the other boy must have grown up under similar circumstances and experienced gang violence just like him.
“That was a human being who made a mistake,” said Garrett.
He added that he believes these influences cause lots of violence.
“There are a lot of students walking around with wounds you cannot see.”
They deal with these wounds in the ways they have seen modeled, and unfortunately, that’s usually through violence.
A major component of forgiveness, Garrett said, was “to be able to look at your enemy and no longer see your enemy.” And so that is what he has practiced.
Garrett informed his audience that forgiveness was not a single gesture, but an attitude.
“It’s not a one-time pill,” he said, “It’s a continuing act.”
He stressed the key role forgiveness plays in the prevention of violence, saying, “The moment that we stop forgiving, the hate takes over.”
This is why it’s important to treat forgiveness as an everyday act, he said.
To Garrett, forgiveness is an important part of preventing trauma and healing from trauma. It is a part of recovery for him.
“Forgiveness is a gift you give yourself,” he said.
Mugdha Gurram is a Reporter for Youth Journalism International.