CAPE TOWN, Western Cape, South Africa – Stunned by the news that Stellenbosch University planned significant hikes in tuition and residential fees, students held a peaceful protest Monday to support affordable education.
The protest at the Tygerberg Campus, said organizers from student government, was to show that students were in mourning for the “loss of intellectual development” through higher education for students who couldn’t manage the fees. 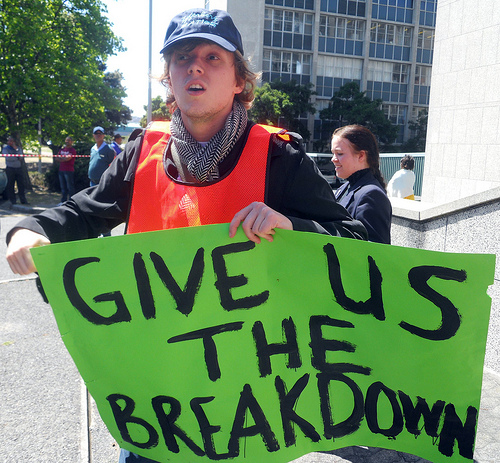 The action came after students learned that, starting in January, their tuition would jump by 11 percent and their residential fees by a whopping 14 percent.
This increase is two to three times the national inflation rate, which is currently 4.4 percent.
A month ago, when the university first announced the increases, the hikes were stated to be 12 and 15 percent, prompting students to submit an official complaint to the administration.
The student government then hosted a forum on September 21, giving students a chance to air their grievances and ask for answers from Student Dean Llewellyn Macmaster.
In response, the university dropped the increases by a single percent, but students continued to be concerned for their financial situations.
Tygerberg Campus is home of the Faculty of Health Sciences and students here study to become doctors, dieticians, physiotherapists, occupational therapists and speech therapists.
Their courses are some of the most expensive undergraduate degree courses in South Africa, as well as some of the longest.
Of further concern is access to bursaries, or scholarships, and loans. In South Africa, it is increasingly difficult for a middle-income sector student to gain access to academic bursaries, but student fees have reached a point where they are unaffordable to those of middle income.
In an official statement to their campus, the management of the Faculty of Health Sciences and to the university administration, the student government requested three things: a breakdown of the components of student fees; more bursaries for needy students and for a commitment that students would, in the future, be included in the budgeting process.
Student government leaders asked that students at the protest wear red and black in solidarity with the cause for affordable higher education. Protestors walked through campus and met faculty management at the teaching building.
There, student government Chairperson Sheldon Marais, Assistant-Registrar Ronél Retief and Professor Wynand van der Merwe, the dean of the medical school, addressed the group.
In the week leading up to the protest, student government leaders and administrators voiced separate concerns.
Students worried that there would be little to no turnout, as Tygerberg students are notoriously uninvolved in politics due to their academic workloads. The student government made use of a variety of media, including Facebook, to tackle this concern. 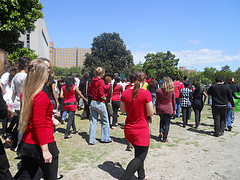 Given that more than 200 students turned out, the plan worked.
Administrators had a different worry – that the protest would turn violent.
South African history is riddled with violent protests, and it is a culture that is still entrenched. In order to prevent this, the local police were notified of the protest and the security service of Stellenbosch University was asked to be on active duty at the protest. Fortunately, their intervention was not required.
In speaking with students, the Faculty of Health Sciences management said they were in the process of negotiating with private companies to make their bursaries available to middle-income students.
Furthermore, they told students, any surplus funds at the end of 2010 would be ploughed into providing financial support to students. Faculty also said they were actively searching for more funding for their students.
Student government leaders announced that they would be making a portion of their budget available for textbook bursaries.
The protest is not only aimed at the Stellenbosch University administration, however. It is aimed at the government of South Africa. Government subsidies of tertiary education have decreased substantially, which is something that neither students nor the country can afford.
The student government is urging students to write personal accounts of the difficulties they face in funding their studies. These accounts will be collected, bound, and delivered to the South African Parliament. 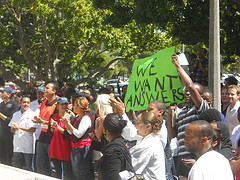 “We should work together, and not against each other, on this matter,” said Van der Merwe.
During Monday’s protest, Marais, Van der Merwe and a member of the Tygerberg Student Union all signed a document committing to more effective collaboration and support.
While little immediate effect is likely from this mass action, it is perhaps the principle that matters more.
Retief, the registrar, acknowledged the day and its proceedings as “truly historic.”
After more than a decade of virtual silence from students on this campus, they are standing together for a common cause. A sense of unity was tangible at this protest.
As Macmaster said at the forum last month, “Students need not shy away from being activists for causes that affect them.”

Mariechen is a Senior Reporter for Youth Journalism International.