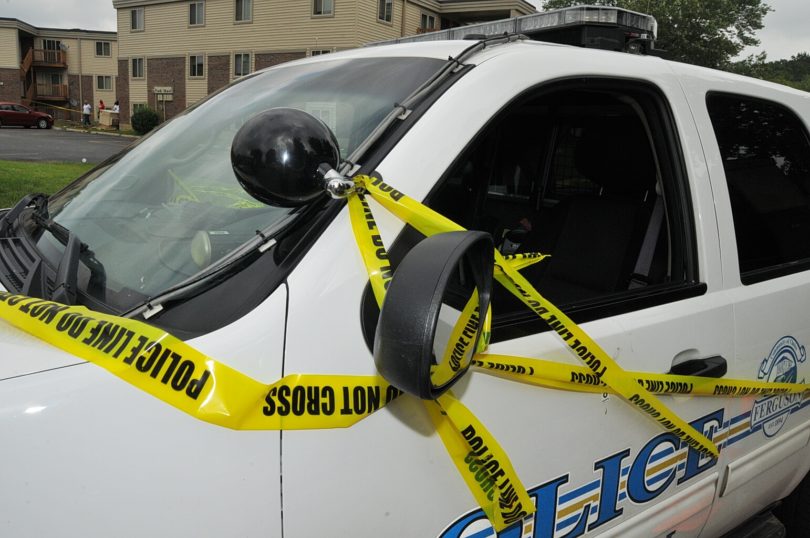 Police car driven by officer involved in shooting of Michael Brown (Photo released by St. Louis County prosecutor, Robert P. McCulloch)
OAKVILLE, Missouri, U.S.A. – A split television screen this evening showed protesters gathering in Ferguson and chanting in unison on the left side while the prosecutor for St. Louis County spoke on the right side, explaining why a grand jury chose not to indict police Officer Darren Wilson in the controversial Aug. 9 shooting of an unarmed 18-year-old in Ferguson.

The killing of Michael Brown, an African-American, sparked a series of riots beginning the night of his death and continuing off and on ever since.
After the prosecutor, Robert McCulloch, stopped speaking at the press conference, the crowds that had gathered in anticipation of a decision on whether Wilson would face criminal charges grew unruly.
As President Obama appealed for calm – citing Brown’s family’s call for peaceful protest – police fired smoke to disrupt the angry crowds in Ferguson.
Emma Sona, a student at St. Louis County’s Oakville High School, said she believes peaceful protests are good and necessary, but violent riots are counterproductive.
“This verdict doesn’t mean that racism and police brutality don’t exist,” Sona said. “The way to solve racism in America is not violence.”
She said, too, that the police response to protests, including the arrest of journalists and firing tear gas into neighborhoods, was unacceptable.
Another student at Oakville, Brittany Perry, said she believes “what Wilson did was in self-defense to protect himself from Brown.”
A statement issued by Wilson’s attorneys said that “law enforcement personnel must frequently make split-second and difficult decisions” and claimed that Wilson “followed his training and followed the law.’’
The statement from the Brown family said, “While we understand that many others share our pain, we ask that you channel your frustration in ways that will make a positive change. We need to work together to fix the system that allowed this to happen.”
From the television pictures in the hours after the verdict, it is clear that protesters were not entirely peaceful.
After McCulloch’s announced that Wilson would not face charges, people screamed or cried on South Florissant Road, with violence breaking out about an hour after the prosecutor began speaking.
Gunshots were heard, according to police, and a couple of police cars wound up on fire there. Journalists and protesters fled the gas-ridden ground after police fired cannisters at them when some demonstrators sought to get past a barricade.
Sydney Hallett is a Reporter for Youth Journalism International.
***
Your tax-deductible contribution can help support this nonprofit at
www.HelpYJI.org