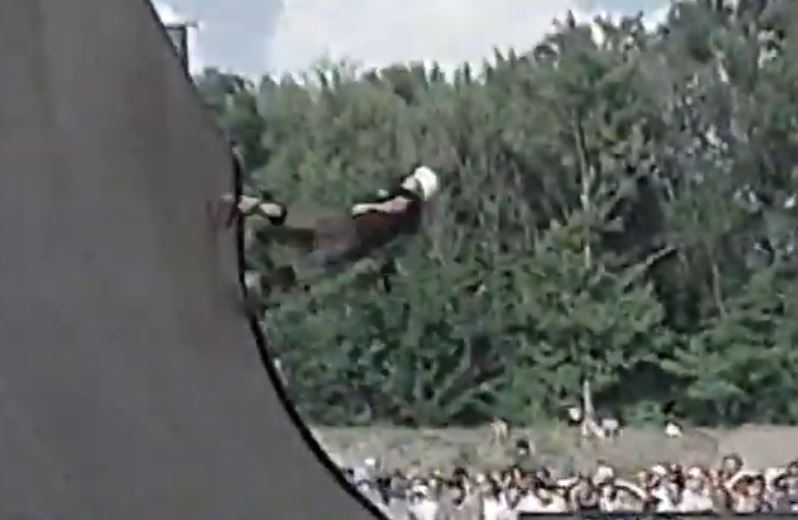 BRISTOL, Connecticut, U.S.A. — Despite soaring temperatures and long lines, people are turning out in droves at Lake Compounce today to see some of the world’s best extreme athletes — and grab some corporate freebies along the way.
At the mini skate park where the public can show off, Frank Chop was hanging out near the half pipe watching his son Matt on Rollerblades. Only the best get the chance to try the most challenging section of the course — and that’s where Matt was.
“It’s his whole life,” said Frank Chop, who figures the boy will compete professionally when he’s old enough.
Over where the professionals practice, 18-year-old inline skater Chris Fleener, the top-ranked rookie in the park, or street, competition, said the site is “pretty cool” and the venue has “a nice, family atmosphere.”
Fleener said he likes the area better than the Texas event last month because the Lone Star state is too flat.
Fleener said he started off as a skateboarder but “skateboarding is gay” so he changed to blading.
Over in the PacSun area, a biking fan, Robert Urban, waited in line this morning for a chance to win a scooter. He said he’d been scooping up freebies everywhere he could and watching the bikers’ best moves as well.
Dora Wynne, standing in line to get some free stuff for her children, said she’s taking orders today. “I’m dong what they tell me to do,” she said.
A security guard, Theodore Greenberg, said there haven’t been any problems at the X Trials. He said he is trying to enjoy himself but it’s too hot.
There are long lines everywhere. At the AT&T booth, where there are phones in pineapple-shaped fixtures, the music is really loud but people are still finding a way to chat with distant friends and family.
This afternoon, a Bristol band that plays a mix of funk and jazz, called Stanley Maxwell, is going to perform at 2:30 and 4:30, said one of its members, Andy Chatfield. They were setting up large amplifiers and a fan this morning.
Devin McCarthy, coming off the bungee jump, pronounced that it was fun.
“I’m going to do it again,” McCarthy said.
An aggressive inline skater from Orland, Fla., Jon Davies, 19, said the X Trials are a great opportunity for the professionals, too.
“This is, like, where you can skate next to guys you admire and guys who have been doing this a really long time,” he said. “They’re really good and it gives you a chance to see how good you really are.”
Francios Phillips, a 20-year-old inline skater from Salem, N.C., said the “the whole world” loves his sport even though it’s so new.
“It’s weird cause you skate with guys from your little scene and you don’t realize sometimes that skating is worldwide,” Phillips said.
At the skate park for visitors, 13-year-old Steve Havis of Old Lyme, a skateboarder, said he enjoyed it.
“The only thing I hate about this park is you have to wear a helmet,” he said.
Havis said he came to get some autographs and free stuff.