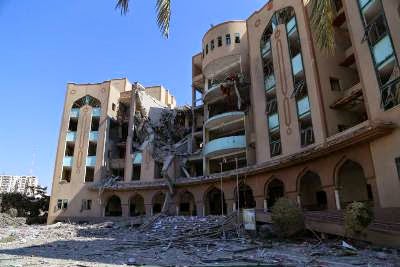 Last week, the administration building on the Islamic University of Gaza campus sustained major damage in the war with Israel. (Photo from its website)

KHANYOUNIS, Gaza Strip – After airstrikes hit the Islamic University of Gaza one early morning a week ago, it didn’t take long before students began cleaning up the debris. 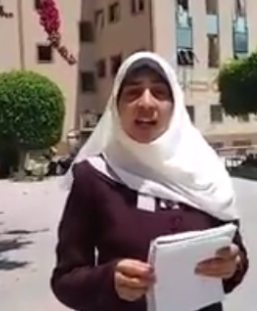 Nesma Qandeel, a 2013 IUG graduate who lives in Gaza City, announced on her personal Facebook account that there would be a volunteer campaign to clean up the university.

Both graduates and students responded with great support, Qandeel said.

”We felt it’s our duty to stand by our university and to clean it,” Qandeel said, adding that they didn’t want to wait for anyone else to help. “We owe this to the university.” 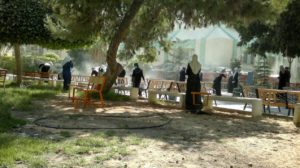 Students, alumni and friends help clean up the Islamic University of Gaza on Thursday. (Photo courtesy of Mona Zemili.)

Qandeel reached out to the university public relations and security departments.
They welcomed her initiative, she said.On Thursday, Qandeel and about 40 other women got started about 8 a.m. and worked  about four hours.
Mona Zemili, 23, of Gaza City, was happy to help.

“When I first heard about it, I was really glad that I can help,” said Zemili. “I  shared about the campaign in many Facebook groups. I really wanted to make it happen and we did.” 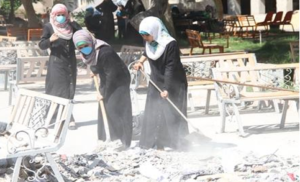 Mona Zemili, center, works with others to
clean up the campus. (Photo courtesy of Mona Zemili.) 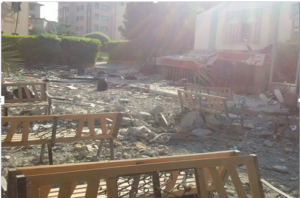 Above, the area before the clean up effort. (Photo provided by Nesma Quandeel.)

Damage, which the university estimated as much as $1.5 million, impacted most of the building, its offices and meeting rooms, the main conference hall.
Zemili said some journalists came and interviewed them. Campus security officers helped with the cleaning.

The university showed its gratitude, too, she said, rewarding their loyalty by providing masks and breakfast for the cleanup crew. 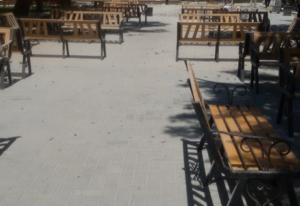 After the clean up effort. (Photo provided by Nesma Quandeel.)

When asked how she felt when she stepped in, Qandeel said, “It was a mix of outrage and pride. I was proud of my university that scares Israel that much. I also shed some tears.”

The school remains strong, said Qandeel, one of the many youth of Gaza who are willing to rebuild it and make it even better.

Dalia Al-Najjar is a Reporter with Youth Journalism International.