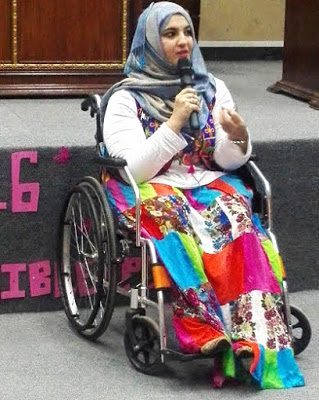 Tanzila Khan, a women’s rights activist in Pakistan, addressed the challenges faced by women with physical disabilities. At the top is the banner that decorated the front of the room. (Arooj Khalid/YJI)

Pakistan – After the powerful success that Pakistani women have had recently – whether it’s Nobel prize-winning Malala Yousafzai or Oscar-winning Sharmeen Obaid, lots of women here have decided to take control and play their part in empowering each other.

Some of them spoke at the WECon’16 – Women’s Empowerment conference – held on International Women’s Day at Forman Christian College University on Tuesday.
After opening with recitations from the Holy Quran and Holy Bible, conference participants heard from inspiring speakers who had overcome serious challenges.

Tanzila Khan, a women’s rights activist whose disability requires her to use a wheelchair, discussed the childhood difficulties she faced as a disabled girl. She put the special treatment she received because of her disability to good use and made something great out of it. 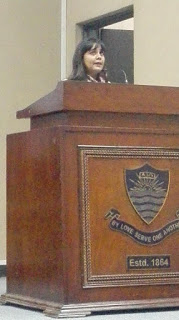 While narrating the story of how she managed to get her first book published in her early teens, she told the audience how the 2008 earthquake inspired her to do something for her country, just as all the able-bodied individuals were doing. Khan went from house to house to sell her book and raised money for earthquake victims.

After Khan went on an exchange in India, her mother saw how she wanted to make a difference and became an advocate of her freedom. Khan said the older and younger generations need to merge their ideas and values for our society to work in harmony. She encouraged the youth of today put behind their obstacles and disabilities because every youngster has the power to spread so much light that it dazzles others. She laid emphasis on never underestimating yourself.

Combating online harassment of women on a daily basis is lawyer and internet rights activist Nighat Dad, who founded the Digital Rights Foundation.

Dad recounted her own story of emotional and physical abuse from her husband that led to divorce when her son was just six months old.
Obstacles faced by women in the workplace are even harder for a divorced mother, Dad said, with the stigma Pakistani society attaches to single mothers. The misogyny and sexism in the legal community was beyond imagination and eventually, Dad said she left her job at a law firm and started working with a women’s rights organization.
Zenith Irfan, who spoke next, defied all stereotypes. She never really knew her father, who died when she was 10 months old. But his dreams of traveling northern Pakistan on a motorcycle inspired Irfan to try it herself.
It was originally her mother’s idea, Irfan said, and one she found unorthodox. But once she accomplished it, Irfan relished how much she was capable of – and she told listeners that they, too, were capable of amazing feats if only they would give it a try. 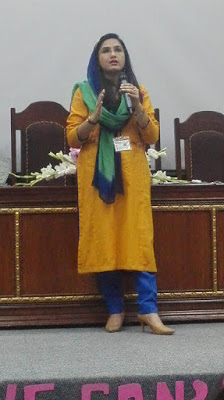 Zahida Kazmi, the first female taxi driver of Pakistan, also told her story. She started in her profession more than 20 years ago when her husband died. She was left with six children to feed and no family support. She bought a taxi through a loan and started working hard for her children. She wanted them to be educated and responsible citizens.

But driving a taxi was challenging. Kazmi recalled many male taxi drivers waiting for passengers who wouldn’t let her get a passenger because she was the only woman.
Still, she kept on working, motivated by the love she felt for her children.
Women aren’t weak, Kazmi said, and might be even stronger than men.

Next, came Zamurd Awan, a faculty member of the political science department at the college. She discussed the women’s harassment bill that was recently passed by the government in the provincial assembly. The bill spurred a national debate about whether certain legal protections were necessary and how it would work.

Awan addressed the popular misconceptions related to the bill and argued certain points that are frequently debated. Though people contend that there’s no need for bills like these, Awan pointed out that Pakistan is among the world’s worst five countries for women. 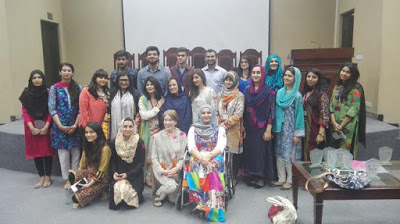