Simsbury, Connecticut, UNITED STATES — What began as any normal day for Sudanese man Francis Bok ended in the hell of being captured into child slavery that would change the rest of his life.
Yet Bok is now seeking forgiveness for the people responsible for the nightmare. 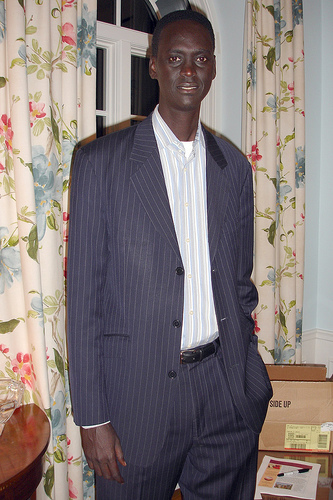 Bok was only seven when his mother sent him to the local market to sell peanuts and eggs for the family and Northern Sudanese men raided the village, viciously slaughtering the men and capturing the women and children.
Bok, who could only speak his native tribal language as a child, said he couldn’t understand why they hated him.
“I knew that I couldn’t fight back, because if I do, I would get killed,” Bok said at a recent appearance at the Ethel Walker School in Simsbury.
That terrible night in 1986, Bok’s captors took him into Northern Sudan and forced him to be a child slave for an Arab family. He never saw his parents or sisters again, and learned years later that they were burned alive in the raid on his Southern Sudan village.
Although his masters were cruel and spat on and beat Bok daily, he never lost hope.
“I may not have anyone to talk to me and to love me but I know God does,” he said.
Bok said he dreamed of being free and growing up to be like the man his father was.
“I would say I never lost hope because I’m a believer.” Every day, he hoped that someone would come to rescue him.
Over the years, Bok learned to speak and understand Arabic. Once he asked his master why they treated him so poorly and called him “abd,” which means a black slave in Arabic.
His master told him it was because he was an animal, Bok said.
“That made me mad. I said, ‘I’m not an animal.’”
Bok and fellow black slaves in the area were terrified of escaping. They were threatened with forced amputations or torture if they even attempted to escape.
But Bok knew he had to try.
“In my heart, I said I would rather die than be a slave.”
After the second failed attempt to flee, his master held him at gunpoint. But he never lost faith. He prayed to God to save his life, and thought that if he prayed maybe God would deliver him.
But in 1996, 10 years after he first was forced to leave his family and friends behind, 17-year-old Bok managed to escape the home of his masters and flee to Cairo, Egypt, where he found refuge in a church.
Three years later, an American man helped him move to the United States.
In order to live in the U.S., Bok needed to seek refugee status through the United Nations. He said he had to tell the story of his life to U.N. officials in a long trial. Yet, he said, “It was my story. It didn’t matter how long it took.”
When he entered his first apartment in America after being accepted as a refugee, Bok said he was in complete disbelief of his situation.
“Nobody would ever again control me.”
Alone in his Fargo, North Dakota, apartment, Bok spread his arms wide and said, “Now I am a free man.”
But while he was celebrating, he wondered what he could do to help those he left behind.
“I was concerned nobody knew what was happening in Sudan,” he said.
With the help of writer Edward Tivnan, Bok authored Escape from Slavery: The True Story of My Ten Years in Captivity and My Journey to Freedom in America, published in 2004 by St. Martin’s Press.
Bok also partnered with Sudan Sunrise, a group aimed at spreading the word of the horrors of the current Sudanese conflict in the Darfur region.
One of their initiatives is to raise enough money to build a school in Bok’s hometown, hopefully before next May, which is the beginning of the rainy season. Currently, Bok said there are classes that take place under the tree near where his father’s house used to be.
But he feels this is not enough. “Everything is priority because they don’t have anything.”
Because of his involvement in Sudanese awareness groups, Bok was able to visit his village in February.
Bok described the return to his homeland as a “very, very hard” experience. He said he didn’t recognize the empty place where his house once stood.
“I couldn’t really comprehend,” he said.
Bok even reunited with his brother, who was also captured by the military during the raid. Bok says their meeting was bittersweet.
His brother, one of the Lost Boys, was forced to become a soldier. Bok said his brother believes the solution is to fight.
“I say no, solution is to reconcile.”
Rachel Glogowski is an Associate Editor at Youth Journalism International.

If you are interested in learning more about Bok’s work and the Sudanese conflict or donating money toward the school initiative, check out the following websites for more information:
www.sudansunrise.org
www.darfurhumanrightsorg.org  [editor’s note: this site is no longer active]

Currently Bok, who lives with his wife and two sons in Massachusetts, visits schools, religious centers to tell his story. He even testified before Congress and visited the White House to speak of his ordeal.
But of all the people Bok speaks to, he said the young people are the most important to reach.
“Tomorrow we will be the leaders of the world,” he said.
Bok said the “U.S. government has a strong voice” in determining the fate of Sudan. But, he said, “America can’t do it alone. It’s all of us together.”
He said the future of Sudan, which is due for a referendum in 2011, depends on three things: “reconciliation, peace and forgiveness.”
Some Sudanese people, he said, have a “hard time forgiving Darfurians” for the conflict that occurred when Bok was a youth.
But he said, “Let’s not look back, let’s go forward.”
Bok recognizes that some Americans may feel that the current Sudanese conflict might not be a big concern, but he knows it is important.
There is “no such minor issue,” he said, “when it’s about humanity.”