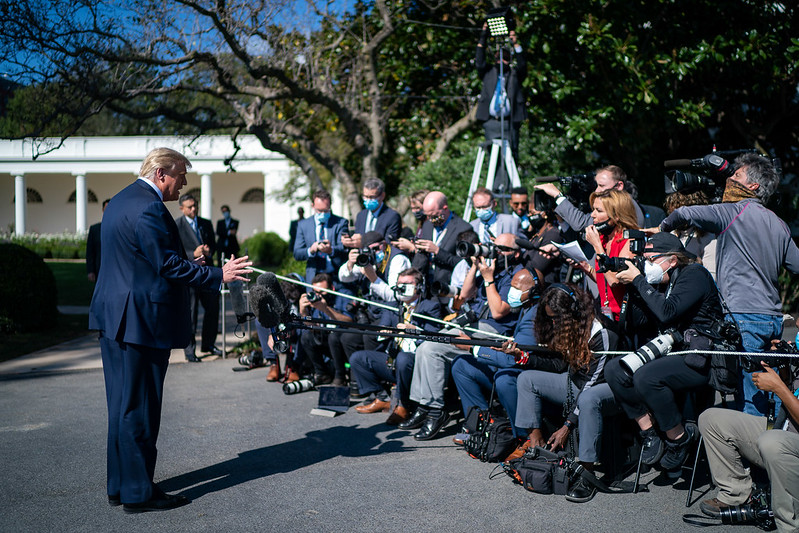 An unmasked President Donald Trump speaks to the press at the White House on Sept. 30, two days before the announcement that he was infected with the coronavirus. (Official White House photo.)

In that Oct. 3 four-minute message to the nation, Trump attempted to dissuade the public’s fears about his recent positive test for the coronavirus, claiming that he considered himself “much better now,” and was going to “beat” the coronavirus “soundly.”

Since the revelation on October 2 that Trump tested positive for covid-19, there has been a great deal of theorizing in the beltway about what his diagnosis means for the election, how it will go on if Trump is incapacitated and whether the executive branch can sustain itself.

Even more than political handwringing, dozens of column inches have been dedicated to interpreting what the “proper” response to this crisis is – for politicians, the media and the citizenry.

The reactions from members of Congress on both sides of the aisle have been largely restrained. Calls of “get well soon” and half-hearted proclamations of how “sad” the situation is abound.

The public’s response has been far less generous. Memes, jokes, and sarcastic asides fill Twitter and Facebook, with leftists across the country taking this opportunity to laugh with schadenfreude-induced glee from the circumstances.

Many leading right wing pundits have taken to the airwaves to decry this reaction, with columnists and commentators alike claiming that mocking Trump in this dire time is “sickening” and “unbecoming.”

I think this type of collective tsk-tsking does nothing but prove the hypocrisy of the far-right political machine. First, let’s not forget how often the likes of Sean Hannity and Steven Crowder revealed in the supposed mental decline of Joe Biden, finding the psychological erosion of an elderly man a fine source of comedy. That is neither here nor there.

Tucker Carlson, Laura Ingraham and the whole conservative media brigade are aware of this discrepancy but do not care. They are hacks of the worst sort, political mercenaries lacking any beliefs they are unwilling to change in hope of pandering to their audience.

Second, asking the American people to be “kind” to Trump in such a time is like Ellen DeGeneres defending her friendship with former President George W. Bush because she can be “friends” with anyone.

Both arguments are wrong, and for the same reason. Being kind to some people can be inherently unkind to others.

Trump – the man whose incompetence and negligence helped exacerbate the spread of the coronavirus – has finally caught it himself, and now we must send our thoughts and prayers?

Trump, the same man who said a “miracle” would cause the virus to “disappear” and insisted on not wearing a mask, directly contradicting his health officials. Trump, who cheered anti-lockdown protesters and called them “great people,” chastising the governor of Michigan  for not giving in to their demands even as they barged into the statehouse waving guns.

Trump, who according to journalist Bob Woodward knew how severe the virus would be, but instead of alerting his countrymen to this severity, decided to “play it down,” for months while the death toll grew.

All the aforementioned examples of lying and playing with human life were committed by a man we are now expected to have sympathy for.

I ask only this: what about the thousands of people who died due to the lies this man told? People like Mark Urquiza, an ardent Trump supporter who believed Donald Trump when he said the virus would “go away,” but died after being infected with covid-19.

Or Cindy Dahlstrom, a Trump supporter who was married to Dave Dahlstrom for more than 30 years only for her life to be cut short by the coronavirus. Their names are forgotten, relegated to obituaries and bygone news articles, while we are expected to have compassion with the man that precipitated their deaths.

Pearl-clutching calls for decency and civility have long been used by the powerful to silence mockery and the robust critique of their records.

Thus, morality, ethics and ideological consistency are trumped by the need of the ruling elite to protect its own. Only when the vox populi begins to use increasingly coarse and biting invective towards its leaders do those in power speak about etiquette.

Then the act of pointing out the crime, or mocking the person for that crime, becomes worse than the crime itself.

We cannot allow this to happen here. People will continue to post memes and jokes on reddit won’t stop.

The Trump administration will use this as a political tool to bash over their opponents’ heads, claiming it proves their inhumanity and callousness.

But don’t forget why Trump is being harangued in the first place. Infirmity doesn’t amount to exoneration.

If you push aside the sycophants and peek just underneath the pale blue bed sheets, you can still see the blood dripping from his hands.

Zurie Pope is a Junior Reporter with Youth Journalism International.