SAN SALVADOR, El Salvador — Expecting a rural, underdeveloped nation when they came to El Salvador to teach, several English-speaking foreigners learned a lesson of their own – that the Central American nation is a vibrant country full of friendly people and eager students.

Teaching immerses foreigners – mostly from the United States, but also from Britain, Canada and Australia – into the Salvadoran culture. For some of them, it’s a place they choose to call home. 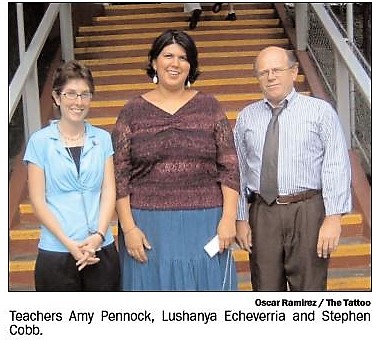 Foreign teachers at the Escuela Panamericana in San Salvador said what they found when they came to the country wasn’t the mud huts, donkeys and street vendors that they’d anticipated.

“I didn’t had any direct information, just probably preconceived notions, mostly what was portrayed in the media and news,” said Stephen Cobb of Tennessee, a 55-year-old elementary school teacher.

Lushanya Echeverria, a 29- year-old Native American fifth and sixth grade teacher from Arizona said she envisioned El Salvador as “green, rural, a lot of trees and not so many buildings” before arriving. “I was expecting more of the downtown street vendors,” she said. “I was expecting the supermarkets to be like that.”

But El Salvador has come a long way from the days of its infamous civil war, when Archbishop Oscar Arnulfo Romero’s 1980 assassination drew worldwide attention to the Central American nation.

“I was brought up in a Catholic school, so I knew the Romero story,” said first grade teacher Amy Pennock, 29, of Arizona.

What they didn’t know was that El Salvador, a country still in development, is a land with malls, freeways and modern homes made of cement.

Private schools that employ foreign teachers usually provide them with housing, and some teachers live inside the school campus.

The braver ones seek out an apartment in the city. But unlike some other Latin American nations, there is no “gringo ghetto.”

Foreign teachers say they find the Salvadoran people so embracing that they’d rather live among the locals. “The kindness of the people is awesome,” said Cobb. “As a foreigner, I don’t feel like I am an outsider. And I know how it is for foreigners that go to the ‘States.’ If you don’t know the language over there, you are ostracized from others.”

The teachers said the people are the most fascinating thing about the nation.

“The country is wonderful, but the people who fill it are much more interesting than any landscape in the world,” said Gena Mavuli, 29, an English teacher from Oregon.

Teachers said the fact that the Salvadoran people are sympathetic to foreign teachers makes their job more enjoyable.

“The students in El Salvador are a pleasure to teach,” said British teacher Tom Jenner, 40, a high school biology teacher at the British School of El Salvador. “I know people that have taught all over the world for 13 years and they come to El Salvador and say, ‘This is the best.’ The students here are really nice.”

The students are “not necessarily particularly hardworking,” but he gets along with them well, said Jenner. “You actually get to know your students over here.”

One of the reasons bilingual schools in El Salvador hire native English-speaking teachers is because they have to deliver a tough English curriculum to meet accreditation standards.

Students at the Escuela Panamericana like their foreign teachers because they see having them as a way they can learn more about other cultures.

“When they teach you English, you learn more vocabulary that is basic for native English speakers,” said Jose Portillo, a 19-year-old junior.

Junior Cindy Urbina said, “It’s cool because when they teach you, for example, history, you can see they actually know what they’re talking about.”

Since foreign teachers project their culture and background through their teaching, students learn more of what’s outside the curriculum.

“You get to know about the place they come from, about their home and what it is like over there,” said Erika Trabanino, 16.

But there are downsides to having teachers from abroad in the classrooms, the students said. Some find it annoying that the foreigners – whose job is to teach – are sometimes amazed and even angry with students who don’t know something about their country or the English language.

“Sometimes, you can’t discuss current events because most of them don’t know what’s going on in the country,” said Urbina.

Students also find it frustrating to have to adapt every year to each new teacher’s unique methods of teaching and evaluating.

“Once you get used to one teacher and you have learned how to treat him, he goes away and another one comes to replace him,” said Cindy Sorto, a junior at the school.

For any teachers, but foreign ones especially, adapting or integrating El Salvador’s culture into the lessons is key in the classroom.

“Relating your teaching to the local culture is important,” said Jenner. “For instance, for me as a biologist, it’s important that if I am doing food chains, that I use local food, animals, and local plants. For someone who is teaching economics, they might want to bring the local economy of the country and things like that.”

Though resources might be limited, it hasn’t stopped teachers from abroad from being creative and teaching through more interactive means – such as singing – or drawing outside attention to El Salvador’s academics.

Some teachers become so fascinated by the country and its people that they decide to build a new life here.

“Ever since I was in Vietnam, I always knew I was going to live outside the United States,” said Cobb, explaining why he chose to settle in El Salvador for good.

“The people here are so nice. I think I have found my place. I’m planning to stay here forever.”

“Being a teacher in a foreign country for sure affects my life, because it’s being here away from Britain, my family and friends,” said Jenner.

“Of course, the other side of it is that I have built a new personal life here,” said Jenner. “My wife is from El Salvador.”

Since most foreign teachers are passionate travelers, they spend their leisure time exploring the six small Central American nations. Foreigners from large countries find it a short distance from one to another.

“I traveled to some popular backpacker locations and met very interesting travelers, most of which were travelling from Mexico to Panama,” said Mavuli.

“I have always enjoyed freedom, and living in a foreign country provides it like no other experience has,” Mavuli said.

Since El Salvador adopted the U.S. dollar as its own currency in 2001, teachers find it easier to live in the country and of course, to have a more decent paycheck.

“One of the nice things about teaching in foreign country is that they pay a lot better,” said Jenner. “I virtually earn the same salary I would earn in Britain, which of course in El Salvador is very high. I live a nice lifestyle here. Generally, international teachers are well paid.”

While El Salvador is not the number one tourist spot in Central America, it has welcomed people from all over the globe, providing a sort of a melting pot for all cultures to socialize.

Foreign teachers face many difficulties while living in a place that is strange to their customs.

Being away from their family and not being able to do the everyday things they normally would is the hardest thing to overcome, they said, but the experience of teaching in a foreign country is worth it.

“Perhaps to have an open mind is the word of advice I would give to teachers that are planning to adventure themselves and teach in a foreign country,” said Mavuli.

“To try to enjoy what the country has to offer and not to look for home-like familiarities when abroad. It is not going to be like your country, so accept that and move on.

“This was a mistake I saw many travelers and teachers make,” Mavuli continued, “and they did not enjoy their experiences nearly as much as those who chose to look beyond the garbage on the street, old buses, and oppressive heat to see, feel, and digest the wonderful country they were in.”