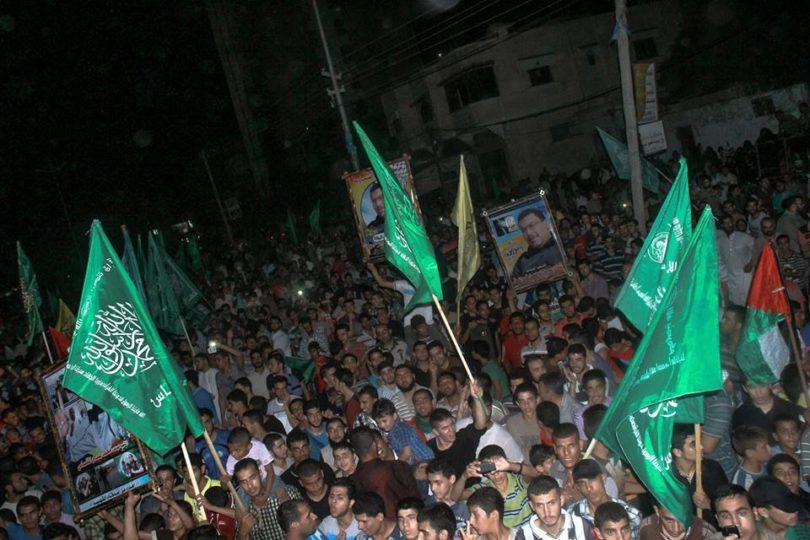 Crowds gather in celebration in Khanyounis on Tuesday, with some people waving the green flag of Hamas. (Salama S. Salama/YJI)
KHANYOUNIS, Gaza – One hour before the long-term cease-fire agreement announcement:
Cautious waiting. Wishful thinking. Everyone trying to summon up all the pain, all the sadness and all the anguish to sigh it out from our exhausted lungs.

All the bewildered eyes gazing upon the TV screen, carefully listening to every word and those tentative words scrambling to smuggle in some hope, positivity and harmless happiness.
Is it true? Is it the end of our interminable suffering? Is it the breaking dawn? Can we now brag about our miraculous surviving? Everyone silently questioned, refusing to even think of the answers as the shelling continued and people were dying.
In the last days, we were disappointed so many times.
We scarcely believe that the black cloud is fading.
After the announcement:
A roar of applause in the room. We have gained what seemed impossible just moments before. Eyes are filled with tears, but for the first time, they’re for happiness.
Exhilaration. Cheerful kids running in the streets expressing their happiness. Mosques filled with chanting. It was pure pleasure. Ironically some people were firing into the air, celebrating the relatively permanent ceasefire. But then the police came and stopped them – sadly some people were injured because of the ”happiness fires.”
Celebrations erupted once the truce took hold at 1600 GMT on Tuesday – about noon in New York – and festivities continued late into the night as we reveled in the end of seven weeks of bloody violence.
Everyone was out in the streets singing and celebrating. We’d almost forgotten how it feels to be happy.
Although it was not unsullied happiness, we had some good feelings because we knew down deep that this is merely the end of the beginning.
We know that this moment can’t fill the void created by our losses.
We know we need more time and patience to put our crumpled-to-pieces selves together.
My cell phone hasn’t stopped ringing. My friends called to congratulate me because we all wanted to share our feelings at that moment with our loved ones.
It’s really great to see Gaza celebrating. It gives us the strength to continue struggling.
On social media, people offered poignant expressions of happiness, joy and indescribable intertwined emotions. Most couldn’t believe the fighting was over. Others cried from happiness.
Surviving this war assures us that we can make it through anything.
We will rebuild Gaza, but we won’t forget.
We will live with the memory of our loved ones, of our destroyed houses and of every moment of the past 50 days.

Dalia Al-Najjar is a Junior Reporter for Youth Journalism International.

“Israeli teen: When the enemy in Gaza is your friend, war is not the same,” by YJI reporter Roei Ashkenazi, published August 8, 2014.