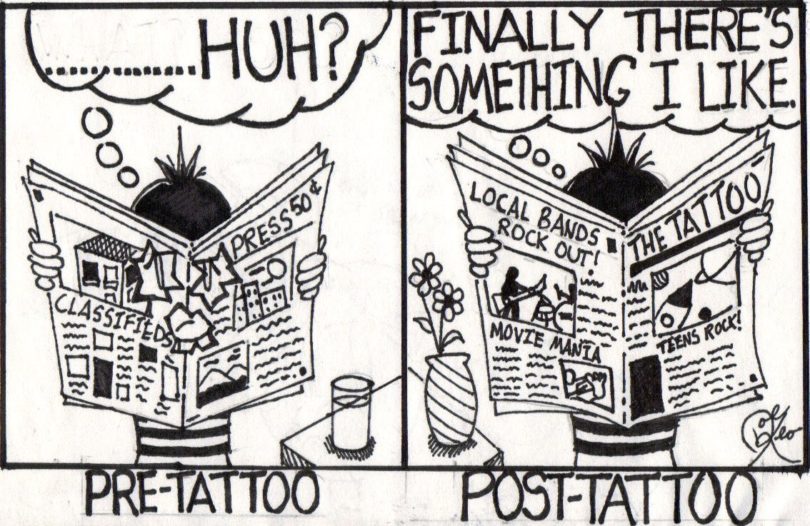 BRISTOL – Student writers for The Tattoo teen newspaper cleaned up in scholastic journalism contests this year.

Three other student journalists for The Tattoo, which is published online and on occasional Mondays in The Bristol Press, secured honorable mentions for their work in the Scholastic Press Forum’s annual contest.

Five of the students hail from Bristol while the other winners live in Singapore, Canada, Texas and New Jersey, part of The Tattoo’s far-flung network of online writers.

The Tattoo appears on page A8 of today’s paper, featuring travel stories written by teen writers who ventured to Australia, Las Vegas and the Henry Ford Museum in Michigan.

Jordan won in the news features and cartoons categories in the SPF contest sponsored by American International College in Springfield, Mass., which attracted more than 2,000 entries.

Jordan’s news feature was a probing look at teen depression published in The Tattoo in December.

Another Eastern senior, Joe Keo, also got a first-place award in the contest’s cartoons division for his work called “The Daily Sketch.”

Keo and Jordan shared an honorable mention as well, in the features category, for their look at several Connecticut art museums.

Mike Nguyen, who recently finished his freshman year at Boston University, got top honors in the column category for a story he wrote before graduating from Eastern about the high cost of going to the prom.

Singapore writer Kaishi Lee got a first-place award in the first person division of the SPF contest for an article describing what it was like for her when a SARS scare swept her country.

Kyle Pucciarello, a New Jersey writer for The Tattoo, secured a first for his review of Johnny Cash’s “Hurt.”

A Bristol Central High School senior, Danielle Letourneau, got an honorable mention for a news story she wrote about a protest at Central on the first day of the war against Iraq last year.

A Central sophomore, Jen Plonski, nabbed an honorable mention in the columns category for a piece she wrote about trying to stay awake at freshman orientation.

Sam Naishtat, a Texas teen, also got an honorable mention for a column he wrote for Father’s Day.

In addition to the SPF awards, a Tattoo writer from Ontario grabbed a Gold Key in the news category of the annual scholastic journalism contest sponsored by the National Newspaper Association and the Quill and Scroll Society at the University of Iowa.

Canadian Angela Kozak earned top honors for a news story she wrote about a Toronto reporter who had just gotten back from Baghdad.

Kozak’s award was the only Gold Key that the Quill and Scroll Society gave to any Connecticut publication.

The Tattoo, which recently celebrated its 10th anniversary, has won 34 Gold Keys, the top prize in the high school contest, since 1997.

The teen paper is not connected to any particular school. It has had members from Eastern, Central, St. Paul Catholic High School, Miss Porter’s School, Torrington High School, Avon High School and scores of other schools across the globe.

Teens with an interest in journalism are encouraged to join The Tattoo, which is free to participants and normally meets weekly at the Press, 99 Main St. Its next 90-minute meeting is tonight at 5:30.

This is a good time to join The Tattoo, which is in recruiting mode. It has proven during the past decade to be a great place for young writers to start a career – several alumni are working as journalists now – as well as winning prizes and nabbing college scholarships.

The Tattoo is especially eager to find teens who are interested in writing or photography who are entering their final year of middle school or their first couple of years of high school, but older teens are welcome and exceptional younger students might get the green light to join.

For information, contact The Tattoo’s volunteer advisors, veteran Press reporters Jackie Majerus and Steve Collins, at 523-9632, or at thetattoo@gmail.com.

The Tattoo’s award-winning stories and cartoons, as well as hundreds of other pieces, are available on its website.