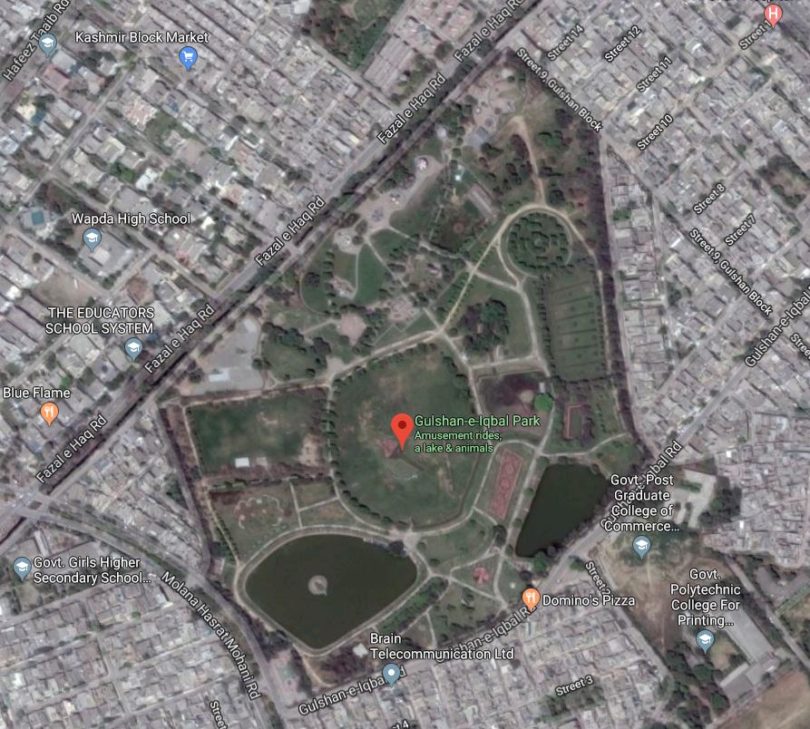 Google map.
By Arooj Khalid
Senior Reporter
Youth Journalism International
LAHORE, Pakistan – Toddlers and children playing
around the swings, people celebrating the joyous arrival of spring. It was
Easter, a holiday widely celebrated in my city.

This seems like the description of a nice evening
at the park.  Would that it remained so.

A suicide bomber attacked a local park in Lahore
around 7 p.m. on Easter Sunday.  More
than 60 people lost their lives, more than 300 families are praying for the
recovery of their injured relatives.

News channels are flashing footage of the rescuers.
Ambulances are speeding by, loved ones are running here and there.

There’s an influx of social media posts, some condemning
the attack and some blaming it on opposing organizations. Other posts show
pictures of children who got separated from their parents in the rampage after
the blast, and some are trying to identify the suicide bomber. Some even go as
far as to say that the blast was nothing more than a distraction for the public
from the recently captured agent of RAW, the Indian intelligence agency.
A faction of the Taliban recently claimed responsibility
for the suicide bombing in the park and openly stated the targets were the
Christian minority of Pakistan – and that similar attacks would continue.
The Taliban are one of the well-known extremist
groups who claim to fight for Islam but clearly go against it in every one of
their actions.  To quote the Quran,
Chapter 2 (verse 11-12), “And when it is said to
them, Make not mischief in the land, they say: We are but peacemakers. Now surely they are the mischief-makers, but they perceive not.”
Most terrorist attacks that happen
around the world are blamed on religion but it makes me wonder if religion even
plays a part here or if it’s just being used as an excuse.
It is said that you need morality to
know what is right and wrong, not religion. And even then, most religions of
the world promote peace and coexistence.
Then, when these vicious extremists act
upon other lethal and barbaric values, it makes all our attempts at coexistence
feel trivial.
As a Muslim, born and raised in a Muslim
family, in a city dominated by a Muslim population, I have a ton of Christian
friends. I’ve been to church and not only am I taking a course in Christian
ethics, but I also go to a Christian university.
If that doesn’t depict the unity
between Muslim and Christian masses in Lahore, I don’t know what does.
If out of nowhere, these extremists
come and drop bombs on our Christian brothers and sisters, we won’t sit calmly
with our hands on our laps.  Our
ancestors created Pakistan to liberate us and leave behind the savageness.
Now the responsibility falls on the
Punjab government. Can it protect its citizens from a cruel stream of terrorism
that may be in store for the future of Lahore and assert its potency despite
the opposition?
Punjab’s leaders must show by their
actions that they are capable of safeguarding the minority populations as well
as any other.
***
Your tax-deductible contribution supports students
served by this educational charity.
Thank you for your generosity.
www.HelpYJI.org