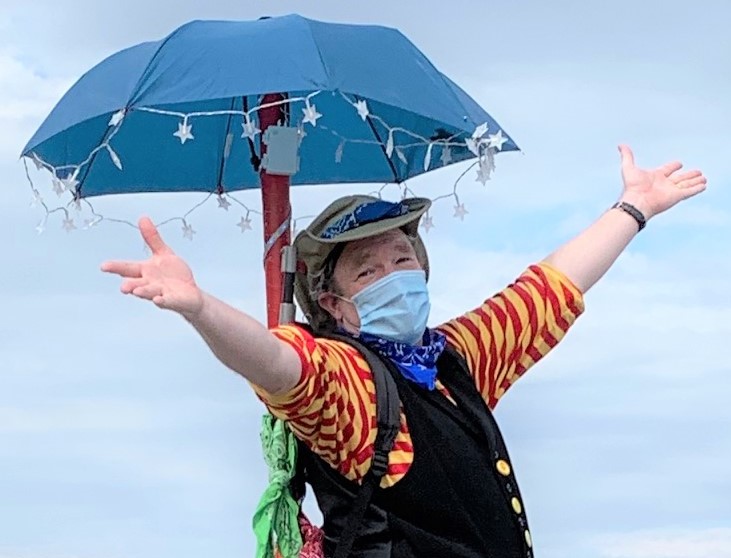 Clarksburg, Maryland, U.S.A. – The internet has been the main place for interaction today, from school to sports practices. Almost everything is online now to keeping going in a world of uncertainty during the coronavirus pandemic.

But some events seem too outlandish to even begin to start operating online and have completely shut down.

How can a circus or magic show not be in person? Can someone even try to unicycle or stilt walk in their own basement? As much tragedy as the covid-19 pandemic brings, it also summons great amounts of ingenuity, including from traditionally live performers.

Gregory May, a circus arts performer in Baltimore, Maryland, converted his shows into an extraordinary blend of socially distanced mini-shows in neighborhoods. He also performs shows from home via Zoom.

A masked May on stilts. (Photo provided.)

The pandemic took a huge toll on May’s business and brand, he said via Zoom from his basement in front of an elaborate setup.

“I sat around for about two weeks, feeling very non-essential, and then I decided I would put on a show for the local neighborhood kids,” said May, a circus performer for more than 20 years.

“And I set up my equipment out on my driveway, and had all the kids sitting on their driveways, to watch the show.”

May’s ideas spawned from there: if local kids could watch shows from their driveways, why couldn’t others?

Parents and viewers felt the same way, taking to social media to spread the word.

“I started getting calls asking if I could do this in other cul-de-sacs. For most of March, I went all over the place doing these cul-de-sac circuses.”

The cul-de-sac circus was a short-lived dream, though.

Not long after May began performing for small groups in other neighborhoods, the state banned non-essential travel. With the constant disruption of any routine, it took a while for May to adapt to the changing circumstances.

For the first month, he spent his time doing shows exclusively on Zoom. Experimenting with newer, smaller tricks and buying a new microphone helped him create a product he felt was good.

May’s shows have changed drastically since the quarantine forced him to perform from his basement.

“The hardest part is the ceiling height, you know?” said May, dismayed at the loss of some of his best tricks. “The biggest thing I took out was the finale trick, which was balancing six folding chairs on my chin. It’s really high, there’s just no way to do that.”

But it might play to his advantage. The more intimate performances allow May to more elaborately explain things to the audience and create a more comfortable environment. Before the virus, May was able to work in public without a mask. (Photo provided.)

“I’ve had to take out some of the big explosive tricks,” he said, “but I’ve replaced them with things that the students are doing themselves. It may be less huge, but it’s more interactive.”

Now, since the lifting of the travel ban, May has transitioned back to performing in small neighborhoods with his cul-de-sac circuses.

As a performer, projecting his voice to the audience can be dangerous without a mask. But wearing face coverings takes away from his show, he said.

“I do lose a lot with the facial expression,” he said. “When I’m trying these big falls and all these faces, they can’t see them. It was really interesting when I noticed it. I was like, ‘Man, I’ve been doing that bit for 20 years, it always gets a laugh. Why is that not getting a laugh?’ And it’s because they couldn’t see my face.”

For better or for worse, things will never be the same again

“Even when things get opened back up, I still don’t see schools packing 400 kids into a gymnasium,” May said.

Whether we can go back to seeing balancing acts with half a dozen chairs soon or not, performers like May are keeping their acts alive during the deadly pandemic.