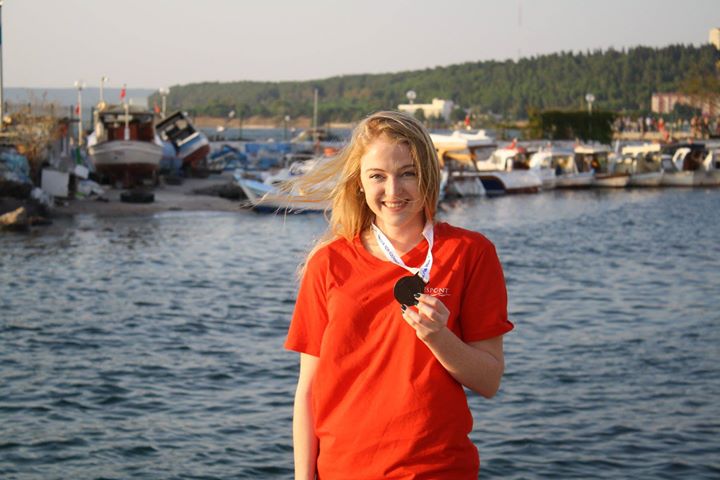 Megan HIggo of Stellenbosch, South Africa, at the Canakkale waterfront in Turkey after she swam across the Dardanelles Strait. (YJI photo)

Çanakkale, TURKEY – Some say that you can’t call yourself a true open water swimmer until you’ve conquered the Hellespont. Steeped in mythology, history, literature and geographical significance, this crossing from Europe to Asia is considered by many to be the ultimate open water swim.

The renown of this enchanting stretch of water goes way back. According to Greek mythology, the lovestruck Leander, a young man from Abydos on the Asian side of the Hellespont, would swim across the strait every night to spend time with his lover, Hero, a priestess of Aphrodite who dwelt in a tower in Sestos on the European side. Each night, Hero would light a lantern to guide Leander in his mission through the formidable waters, and every morning before sunrise, Leander would return home. Because who needs sleep when you have love?

One tempestuous night, Hero’s lantern was extinguished by the wind, and Leander’s quixotic commitment to the crossing proved to be his fatal flaw when he subsequently drowned in the gloomy depths. Good old Greek tragedy.

The story of Hero and Leander has inspired many a famous writer, including Christopher Marlowe, Sir Walter Raleigh, John Keats, Rudyard Kipling, and Victor Hugo, to name a few. William Shakespeare seems to have taken a particular liking to the tale, alluding to it in Two Gentlemen of Verona, Much Ado About Nothing, As You Like It, Othello, and several more of his works.

It is therefore no surprise that the story of Leander and Hero piqued the interests of the famous poet, Lord Byron. In May of 1810, Byron – an avid swimmer himself – set out to put the myth to the test.

Powered by a life of romantic extremes, a liberty in water that his clubbed feet did not afford him on land, and the pursuit of bragging rights, Byron took to the waters in what is now known as the world’s oldest open water swim. After an initial failed attempt, Byron succeeded, reaching the far shore in an hour and 10 minutes.

‘I plume myself on this achievement more than I could possibly do on any kind of glory, political, poetical, or rhetorical,’ said Byron of the feat. He also reflected on the crossing in his poem, “Written after swimming from Sestos to Abydos.”

Ever since, crossing the Hellespont (now known as the Dardanelles) has been regarded as the absolute epitome of open water swimming, and can frequently be found at the top of any open water swimmer’s wish list. On August 30 every year, hundreds of swimmers from all over the world attempt the legendary crossing of the Dardanelles Strait, as one of the busiest shipping lanes in the world is closed for the annual ‘Victory Day’ race.

This year, I was one of them.

As a literature lover and aquatic fanatic who was, let’s face it, shamelessly tempted by the bragging rights involved, my attraction to the Hellespont was instantaneous. Those tall, dark and dangerous waves called my name. At 22, I was the same age that Byron had been when he made his legendary crossing. If a pretentious prestige-seeker like him could do it, then why not a pretentious prestige-seeker like me?

Appalling alliterations aside (I’ll try to stop now), the race sounded like it would be a unique challenge and a great deal of fun. So I signed up. And so at the end of August, I found myself in a crowd of more than 700 hopefuls from all over the world, brought together by our shared dream: conquer the Hellespont.

At just 4.6 km (about 2.9 miles) in water that is by no means cold at the height of summer, the crossing from Eceabat to Çanakkale sounds like a walk in the park when compared to other iconic swims. The numbers don’t do the crossing justice, though.

Swimming across the Hellespont is tricky. As the narrow strait connects the Aegean Sea to the Sea of Marmara, huge volumes of water are funnelled along at speeds of up to 8 km/h (5 miles/h), faster than the pace of Olympic marathon swimmers. A turn in the wrong direction – or at the wrong moment – could leave you swept out to sea, making it impossible to finish – a fate that befalls around a third of all swimmers who attempt the race. This may be a good time to mention my dismal sense of direction…

We were given the following advice: swim in the direction of the radio mast for about 1 km (0.62 miles), then head for the Turkish flag over the hill for another 1.2 km (0.75 miles), then aim for the floodgates of the football stadium, then, when it feels right, aim for the harbor.

From the panoramic perspective of our pre-race boat tour, this seemed reasonably straightforward. But spotting from the water was a whole new ball game. The sun was rising behind the Eastern shore, making the landmarks incredibly difficult to spot. It also didn’t help that hundreds of swimmers seemed to be heading in as many different directions.

Fortunately, my eyes adjusted with time, and it was smooth swimming from there onward. The waves were marvelous, the setting was stunning, and the blissful butterflies in my tummy powered me forward.

Just like Byron, I delighted in the sea, my spirits buoyed by a feeling no other activity could have conjured up. It was going so well, in fact, that I set my conservative course plans aside. Surely, a slightly more direct route couldn’t hurt? The route advice was meant for the average swimmer, but I was Michael Phelpsing along with ease. I was a cheetah of the sea. I was Usain Bolt in dolphin form. I was – oh shucks, there’s the finish line. And I was still too far out.

Of course, my performance up until that point had had little to do with me suddenly becoming Aquaman, and everything to do with the speed at which the current had been moving – a current which had now turned against me. My plan had been to stick to a medium pace the whole way through, but now I had to sprint to avoid moving backwards. I panicked. I hurled all kinds of curses at myself. When I had hoped to follow in the wake of Lord Byron, his success was what I had had in mind, but would my Byronic arrogance prove to be my hamartia?

Just as Lord Byron’s passion and romanticism were characteristic of his generation, my wildly ambitious over-estimation of my own exceptionality was characteristic of mine. If inflated optimism followed by frantic recalibration at the last minute isn’t the marker of a true millennial, then what is?

Yet somehow, I made it. Those last minutes were excruciating, but I made it.

I swam 4621 meters in one hour, one minute and 40 seconds, finishing sixth in the 19-25 category. I got to cheer for my new friends as they came in, my heart warmed by a sense of accomplishment, the late-morning sun dancing in the hills, and the prospect of a nice, long nap.

In those waves, I waved goodbye to my final days as a 22-year old. And while aging is a turbulent experience on its own, I am grateful that I had the privilege of taking on a new chapter in my own changing story while fulfilling a long-held dream.

Finally, committed to my endeavour to recreate Byron’s feat, I eternalized the achievement with a little poem of my own:

There was a young lass of the sea

With arrogance plenty for three

But then she succeeded

Megan Higgo is a Reporter with Youth Journalism International.