KARNEVAL CLASS – At the Gymnasium der Benediktiner in Meschede, students show off their costumes. From left are Britta Siepe, 18, and Eva Nöckel, Maya Argaman, Anna Köster-Kurwald and zombies Kelly Harrod and Katie Grosser, all 19. [YJI]

MESCHEDE, Calle, Germany – In the Western World, it is an acknowledged fact that every year has four seasons – spring, summer, fall and winter.
In some parts of Germany, however, there is one very special fifth season – the season of Karneval.
The German Karneval celebrations, especially in carnival “stronghold” cities such as Cologne, Düsseldorf and Mainz, are legendary.
Although the season officially starts on November 11 at 11:11 a.m., it quickly goes into a rest period over Advent and Christmas, with the main festivities picking up the Thursday before Ash Wednesday, which is called “Weiberfastnacht.” 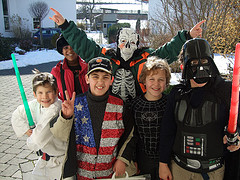 OUT FOR THE CANDY — From left to right – John Grosser (with the green laser sword), 9; Karin Manjate, 11; Mucehed Elhaj, 9; Hendrik Wegener (as the skeleton), 10; Christopher Robin Wanke (as the Spiderperson), 10; and Dido Kirtsov (as Darth Vader), 10. They all attend Luziaschule Berge. [Katie Grosser/YJI]

Although Carnival Clubs throughout the entire country start having their sessions in January, Weiberfastnacht is the day on which the children also start the festivities.
“It’s like Halloween,” explains Annie, my seven-year-old sister.
Indeed, children go to school dressed up as anything from princesses to witches, from Indians to pirates, from clowns to Jedi-knights. Afterwards, they go trick-or-treating with their parents or alone, getting sweets in exchange.
“You can put on costumes and go trick-or-treating and nobody really knows who you are,” said my brother John, who is nine. “That’s all the fun.”
He spent three hours walking through his hometown with his friends and has the sweets to show for it.
But Karneval is not only for kids. Adolescents and adults also go wild during the week before Ash Wednesday.
Some dress up very elaborately and take part in the various Karneval activities throughout the week, while others get dressed up to avoid standing out but actually dislike the festivities.
“There is no purpose in Karneval,” criticized 19-year-old Nicole Zimmermann of Remblinghausen. “Most people just use it as an excuse to get drunk.”
While the holidays do date back to a Christianized form of a pagan ritual to bring about spring – and even have recent historical meaning as a symbol of showing patriotism during the French occupation of the Rhineland in the 19th century – there is a wide-spread problem with alcohol, especially on Weiberfastnacht.
Drinking is strictly forbidden in German schools, but it is not unusual for students to sneak in and drink anything from beer to hard liquor during the morning.
Traditionally, teenagers forgo singing for sweets in favor of going to their local pubs and bars.
The minimum age for admission is 16 – the same age at which Germans are legally allowed to drink beer. But because many students try to sneak in with fake IDs and drink hard liquor – for which the minimum age is 18 – the police stand outside the bars and pubs and do random spot checks. 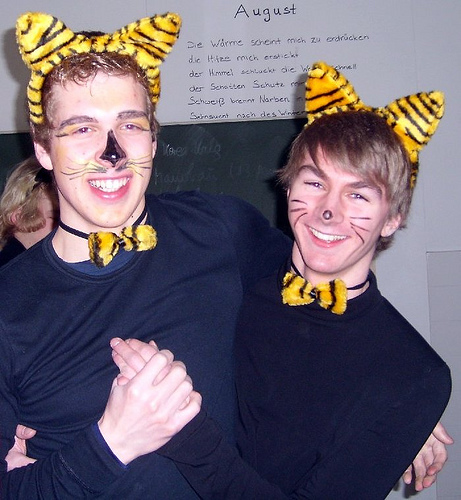 That’s the reason why Kelly Harrod, 19, of Meschede, decided to drive on Weiberfastnacht.
“I don’t need to drink alcohol,” she says. “What’s important is that you’re dressed up and have fun.”
Philipp Brock, 18, from Eslohe, Meschede, agrees that there is more to Karneval than getting drunk.
“It’s like a five day party,” said Brock. “Who wouldn’t want to join in?”
Regardless of their attitudes towards the festivities, no one can deny that Karneval has become an important part of the German culture.
There are clubs solely devoted to its purpose, there are original songs written only for this week and there are even special carnival cries, ranging from “Alaaf!” and “Helau!” to “Halt Pohl!” and “All Rheydt!”
And although many really do dislike Karneval, on Rosenmontag, the Monday before Ash Wednesday, hundreds of thousands of people dress up for the Karneval highlight and celebrate in the legendary street parades throughout Germany.
The organizers use these parades not only to frolic and gambol, but also to make fun of political issues, a tradition dating back to the French occupation.
While the concept of carnival is widespread throughout the world – Carnival in Rio, Venice Carnival or Mardi Gras in New Orleans – the German celebrations are unique.
Some see the end of the festivities with sadness and some with relief, but as of Ash Wednesday, Germans continue again with the fourth season like everyone else in the world.