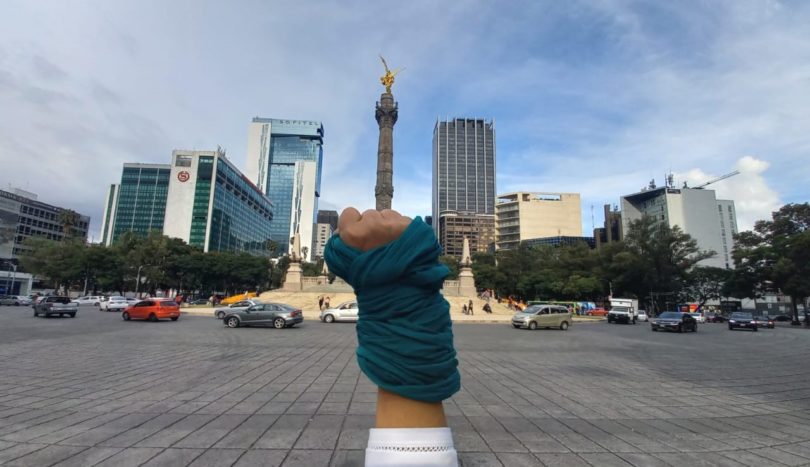 The symbol of Mexico's "green wave" for reproductive rights, at the Angel of Independence in Mexico City. (Regina López /YJI)

MEXICO CITY – To punish a woman for deciding her body’s future is now officially unconstitutional in Mexico.

Early last month, 8 out of 10 members of Mexico’s Supreme Court voted to permanently decriminalize abortion in every part of Mexico.

The battle started many years ago, but it wasn’t until 2007 when Mexico City became the first place in the country to decriminalize abortion.

Next would be Oaxaca in 2019, followed up by Hidalgo and Veracruz in June and July of this year.

In some states abortion was “legal” under certain conditions, for example if the mother’s life was in danger or the baby was conceived through rape.

Although the seeds for progression were planted, these were just baby steps.

According to the 2020 population and housing census, 77.7% of Mexicans are Catholic. In the most conservative areas of Mexico – generally the rural areas – many people are completely against abortion, no matter the circumstance.

Also, the educational system in Mexico hasn’t changed for a long time, so sex education classes have not been adapted to today’s world.

Mexico’s Health Secretary reported that in 2020, there were 11, 269 legal abortions performed in the country.

So we are left to wonder, is this a pro-birth or pro-life argument?

Women were not blind to these situations. The movement ‘la marea verde,’ the green wave, has been protesting in favor of these changes for years, joining big marches like the annual protest on March 8, which is International Women’s Day.

People are starting to reconsider what they think is correct, but in the process, no more women will get hurt.

The storm has finally moved the clouds.

Regina Lopez is a Senior Reporter with Youth Journalism International.