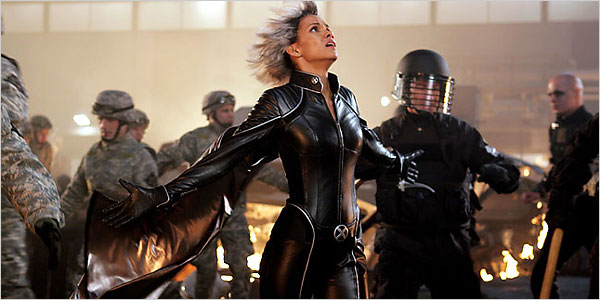 NEWTON, Massachusetts, U.S.A. — The third installment of the hugely popular X-Men films, based on the comic series, begins with a flashback showing Professor Xavier and Magneto visit the young powerful mutant, Jean Grey.

The film then shifts to a boy frantically trying to cut off his wings.

With a new director, Brett Ratner, this X-Men film feels different than the first two. It has more action and it shows off its $210 million budget. But this does not make the film better.

Director Brett Ratner, who previously directed the Rush Hour films, fails to capture the mysteriousness and intrigue of the first two films. He adds instead, forced comic scenes that end up not being funny at all. Like say, for example, the scene in which Wolverine insults Dr. Hank McCoy, a.k.a. the Beast.

He also wastes screen time with unnecessary scenes – like say the whole Angel subplot. In X-Men: The Last Stand, a great story is wasted. A cure for the mutants is created and thousands of mutants flock to the clinics to become “normal.” Magneto decides to fight back and start the war between the mutants and humans. Jean Grey is on his side, but she is now Phoenix, a class five mutant, who is incapable of controlling her powers.

Many of the favorite mutants from the previous films — including Professor Xavier, Rogue, Mystique, and Cyclops — have small parts in the movie in order to make way for new mutants like Angel, and in order for unimportant mutants to have more time onscreen. These include Kitty, Pyro and Iceman.
This makes the film worse, because we don’t really care about Rogue getting jealous seeing Kitty and Iceman together, or to see Pyro fight Iceman.

The new mutants on the “bad guy side.” like Juggernaut, are not very interesting. They just get to be annoying, which brings up the question: why would you ever replace our favorite mutants with these unspectacular and boring new mutants? Is it because Halle Berry complained that she didn’t have enough screen time in the first two films? Did those mutants have shorter screen times because she wanted more time on screen? Probably. But, honestly, who wants to see Storm make the skies cloudy because she feels that someone is upset or see her zap someone a billion times with thunder?

The Last Stand is action-packed, no doubt of that, but the problem is, the whole film is all about the action. That is it. What happened to the story? Is there a story at all anymore? The plot sort of disappears beneath the short but explosive action sequences and dull dialogue. How can this film with so much potential (at least from the looks of the trailer), end up so bad?

All these flaws in the film make this film difficult to recommend. I liked the action. But the film was just so absurd and trite, it’ll probably disappoint any one who sees it, whether an X-Men fan or not.

Jeffrey You is a Reporter for Youth Journalism International.