Maryland, U.S.A. – I remember hearing Trump supporters counter-protesting Black Lives Matter activists outside my home in May, screaming, “We don’t riot,” and “We know how to protest the ‘right way.’”

I could hear President Trump on television saying he supported law and order. What happened today is not lawful or orderly.

Watching the news today, I’m horrified that our country has fallen to this deplorable level, that the man in the Oval Office continues to prompt his supporters to violently attack our democracy. My mind has not yet processed the pandemonium occurring so close to the place I call home.

How can citizens of a country rooted in its democracy bash protesters fighting for a more racially just system, then only months later, rampage through the U.S. Capitol, inciting violence?

Mobs shattered windows, barreled their way into the halls of Congress, MAGA hats and Trump flags in their hands. They invaded the very building representing our democracy, the heart of our country’s values.

My hands shake as I think of my parents, who would have been in Washington DC, had they not stayed home due to the pandemic. Talk of pipe bombs in the city terrify me.

As mortifying as the scene is, I cannot help wondering if I had an inkling that something like this would happen. I am infuriated, disappointed, and frightened, but sadly, I am not surprised.

Since Election Day, I clutched onto my faith in our nation with an iron grip, fearing for what would come in the months before President-Elect Joe Biden’s inauguration.

Our current president is ransacking the country with his refusal to concede a fair election. While ripping away the civil protections of several minority groups, Trump stirred up a pot full of uneducated, heavily armed racists.

Even Vice President Mike Pence doesn’t support this madness, and refused to hand over an illegitimate win to the president. Truly, a sigh of relief escaped my lips: Pence has been extremely loyal to Trump over the past four years, and this was one of the only times he directly opposed the president.

The thought of what would happen if Pence agreed to Trump’s ridiculous claims makes me shudder. Not everyone is going insane, and thankfully, Pence chose the American Constitution over the president.

After today, my rope of faith in our democracy has frayed beyond recognition. Hiding lawmakers from hordes of supporters of a hateful, racist, violent president who lost an election is not the America I love.

An angry white man claiming the election was stolen from him, spreading harmful lies and conspiracy theories is not the leadership I support.

This is horrifying. This is madness. This is not my America. 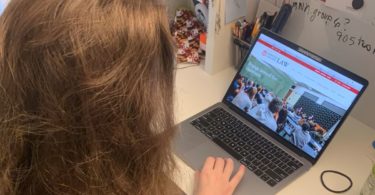