HARTFORD, Conn., U.S.A. – Latasha Fitzwilliams is one of many Americans affected by poverty.
“In our fridge right now, there’s about two things: a half bottle of juice and a box of eggs,” said the 20-year-old from Hartford.
That’s supposed to be food for five people: her sick mother, her unemployed stepfather and two siblings. 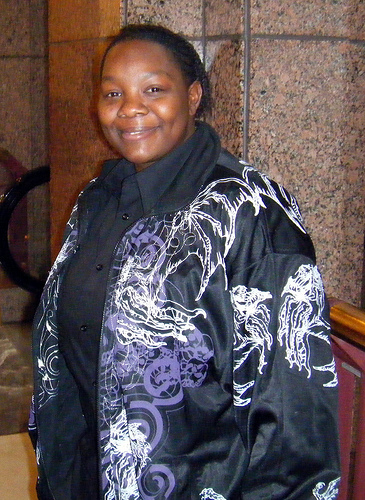 A bright girl, Fitzwilliams finished two cooking programs and has five certifications, but still can’t get a job in this tough economy.
Fitzwilliams said she had a job at the grill at a busy restaurant in her sophomore year at Hartford High School.
In her senior year, she said she took honors classes and was making college plans.
But she couldn’t afford tuition and wound up unemployed.
Fitzwilliams signed on with the Job Corps in Chicopee, Massachusetts and took a culinary program. It helped her with a resume and with getting job interviews.
Even with all that assistance, Fitzwilliams still wasn’t able to find work because no one was hiring.
“I wasn’t picky. I would have taken anything, from a fast food to a low level job at a five star restaurant,” she said.
All the available jobs were taken by people with more experience, she said.
Then Fitzwilliams was able to get a couple of jobs
During the summer of 2009, she worked in the garage of a bus company but it didn’t have enough money to make a position for her.
Fitzwilliams also managed to get temporary third shift job moving job moving files from 10 p.m. to 6 a.m. Even though the hours were awful, it was all she could find.
Now she’s with the Community Renewal Team’s youth employment program. Fitzwilliams is looking for someone who will hire her permanently for “the great training I’ve had, not just the work experience I haven’t had.”
Fitzwilliams said her sister got a holiday job at K-Mart, where the store said it really needed help, but she had only been called in to work once this week.
“I really don’t know what families like mine are supposed to do,” she said.
“Sometimes I say to a friend ‘OK, what can we do to get some quick money?’”
“I know the answer to that question, but I don’t want to go there,” Fitzwilliams said. “I don’t want to throw everything away. But I think about it, believe me, I think about it.”

Yelena Samofalova is a Junior Reporter and Mary Majerus-Collins is a Reporter for Youth Journalism International.