BRISTOL, Connecticut, U.S.A. — Michelle LaFrance is no stranger to the spotlight. The 14-year-old freshman is already making her mark at St. Paul Catholic High School in Bristol, Conn., as the 2006 featured twirler. 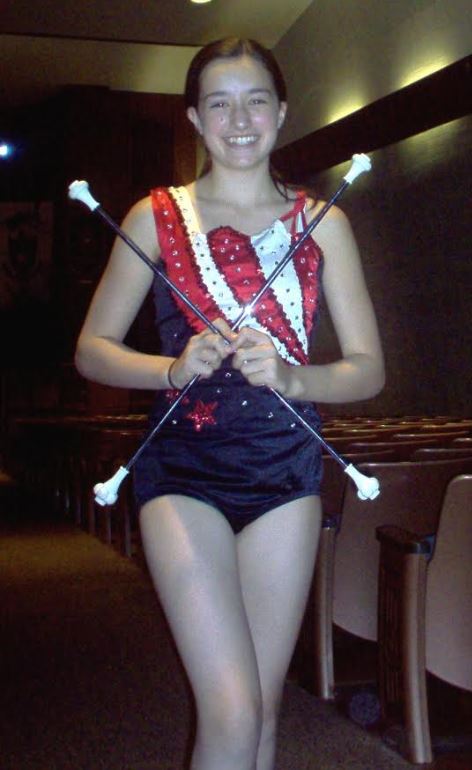 According to LaFrance, she likes twirling because “it’s a unique sport that no one else really does.”

This ambitious teen is a true performer, who always has a smile plastered on her face. LaFrance, who started twirling at the age of four, began competing when she was just six years old.

Since then she has won numerous titles, including Miss Majorette of Connecticut. In both 2002 and 2003, LaFrance was named Little Miss Twirl. This accomplished twirler was later recognized as Preteen Miss Connecticut Sweetheart in 2004. Her current aspiration is to compete nationally.

This past fall, LaFrance and her fellow St. Paul color guard members won first place in the non-musical category for their performance in Bristol’s 2006 Mum Parade. This was the guard’s fourth award in three years.

LaFrance cites Sandy Gozzo, her teacher and coach, as her role model. On October 29, the pair performed together, along with four other alumni twirlers for St. Paul’s 2006 homecoming game. Several alumni members, including the twirlers, returned for the homecoming festivities, which celebrated the school’s 40th anniversary.

According to LaFrance, it was her mother, who was first won over by the sport of twirling in the Bristol Boys and Girls Club’s annual Older Members show.

“My mom did the OM show when she was younger and she saw a girl twirling. She said if she ever had a daughter she’d want her to twirl.”

As fate would have it, LaFrance said, “the girl she saw was Sandy’s daughter.”

Although her routines often require her to twirl two or sometimes even three batons at once, LaFrance says the hardest trick she is working on is “learning to twirl fire.”

Whether she’s performing during the half time show or on stage during an assembly with the color guard, LaFrance never fails in captivating her audience. She can perform even the most difficult tricks with ease and she always does it with a smile.