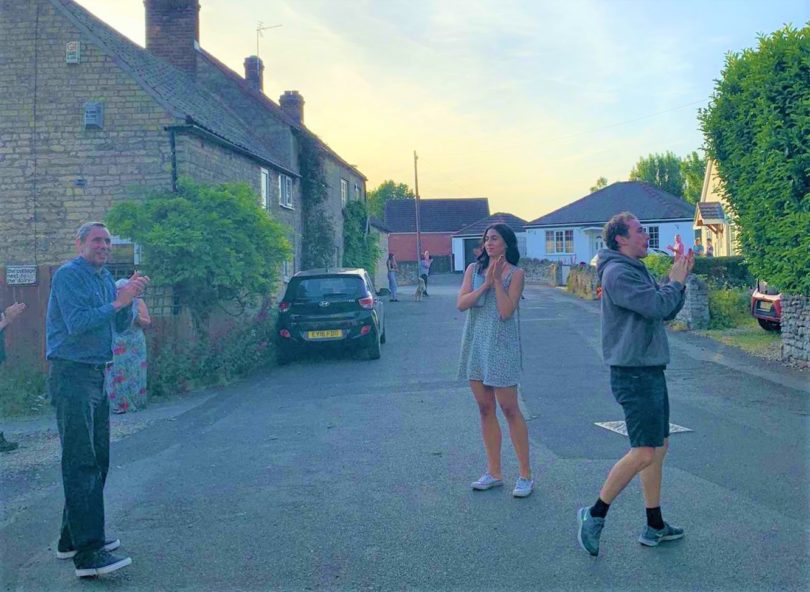 People clapping for the National Health Service and others, in Welton, Lincolnshire, UK. (Nisha Chandar-Nair/YJI)

Lincolnshire, UK – Early in the coronavirus pandemic, the UK government introduced an optional regime to show gratitude for the National Health Service (NHS) staff, care workers and other key workers by encouraging people to stand outside their houses every Thursday evening and clap.

While it can’t be denied that the clap was introduced to encourage people to recognize the hard work of key workers, there are aspects of the routine that can be questioned.

First, who is doing the clapping? Prime Minister Boris Johnson and members of the Conservative Party, the leading political party in the UK, have been seen to show their support for the gesture.

According to a piece in The National, Johnson and Chancellor Rishi Sunak from the Conservative Party were both seen applauding after the two men voted against scrapping the 1% cap on pay raises for National Health Service nurses and firefighters.

The National Health Service has been in crisis caused by mass underfunding from the government for years. In 2019, a picture of a four-year-old boy who was forced to sleep on the floor due to a shortage of hospital beds circulated in the mainstream media.

It’s ironic that Johnson and his many supporters would stand outside their houses clapping for healthcare workers.

Secondly, who is the clap for? The clap has been branded as the ‘Clap for Carers’ yet people have frequently been seen hanging signs in the window of their house reading ‘Thank you NHS’ or ‘Clap for the NHS.’

While the National Health Service deserves every bit of recognition it gets, there are other workers who deserve a round of applause; waste collectors, delivery drivers, supermarket workers, and public transport staff, to name a few.

Some of these key workers are also among the lowest paid. According to Pay Scale, Tesco delivery drivers are often paid as little as £7.43, or less than $10 USD per hour.

If we really want to show gratitude to key workers, why aren’t we giving them a pay raise?

At a time when many are unable to work, easing the financial pressures faced by key workers – who are potentially the sole providers for their families – seems like the logical way to show gratitude.

We should certainly be removing the financial pressures faced by workers such as student nurses, who are essentially paying to work on the frontline during the biggest pandemic in history.

The Guardian drew attention to this issue as it recently revealed that as many as 15,0000 second-year nurses have opted to work on the frontline during the pandemic to cover for the shortage of nurses in the National Health Service. The newspaper also highlighted the fact that many of these students will graduate with debts of around £60,000 due to the government’s decision to scrap National Health Service bursaries.

It would be unsurprising if nursing students found it simply insulting to see the prime minister and members of his party standing outside their houses clapping at 8 p.m. on Thursdays.

To add flame to the fire, Johnson cancelled the free staff parking that was put in place in hospitals to ease financial pressures on health workers and canceled nurses’ permanent work contracts early.

A final aspect of the clap to consider is, what actually was it?

At a distance the clap seemed like an act of unity to show gratitude – a diverse range of people from different backgrounds, including the prime minister, coming together at the same time.

Having observed the clap myself, I’ve noticed how it’s escalated. People were banging drums, playing music and beeping their car horns as they drive past. For many it seemed that the clap was an opportunity to socialize, giving people a sense of normality and of being around people during a period of isolation.

“It’s the best part of my grandma’s week,” said Georgia Brunsden, 20, of Lincoln.

While this does reveal a positive aspect of the gesture, it also distracts from the cause.

The clap was merely a performative gesture.

When Leading British Conversation asked Johnson in an interview if he would take the knee for Black Lives Matter, the prime minister said he “doesn’t believe in gestures.”

This is the same prime minister who was standing outside his house clapping at 8 p.m. on Thursdays to gesture gratitude to key workers during the pandemic.

It’s obvious that ‘Clap for Key workers’ was in fact nothing more than just a clap.

Nisha Chandar-Nair is a Junior Reporter with Youth Journalism International.