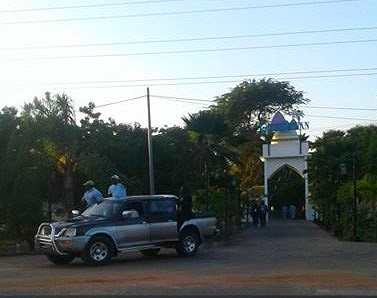 A car leaves Coco Ocean resort earlier this week after a meeting of African leaders and UN officials hoping to peacefully resolve the transition from the current dictator to a newly elected president. (Lama Jallow/YJI)
SERREKUNDA, The Gambia – Nothing is certain today in The Gambia, including peace.
Although the people elected Adama Barrow as the next president and he is to take office next month, the longtime president is refusing to step aside.

President Yahya Jammeh, who has ruled the nation as a dictator for 22 years, initially conceded the Dec. 1 election to Barrow, but then changed his position. He is now claiming the election was rigged and is calling for a new election.
Leaders of other African nations came to The Gambia this week to meet with Barrow and his coalition team and United Nations officials to try to negotiate a solution to the situation.
Barrow has vowed that when he is president, he will bring criminal charges against Jammeh for crimes against the Gambian people.
The Tuesday meeting included President Muhammadu Buhari of Nigeria; President Ellen Johnson Sirleaf of Liberia and the outgoing president of Ghana, John Drahami Mahama, who recently lost his election.
Sirleaf currently chairs the Economic Community of West African States.
But the gathering at Coco Ocean resort apparently didn’t solve the matter. When the presidents left, they headed not toward the airport, but to the statehouse.
The four presidents they said were next holding a meeting with UN agencies in the country.
As of Thursday, there was no official word of progress.
The Economic Community of West African States and Senegal have already sent a warning to Jammeh that if the negotiations don’t bring a positive result, they will send in troops to remove him from office.
War is possible if Jammeh insists on staying in power.

Peace is possible, too, but it appears it depends heavily on Jammeh’s willingness to leave without a fight.

***
Support Youth Journalism International’s young reporters –
wherever in the world they are. A vibrant press is essential to democracy.
Your gift makes a difference.
Thank you.
HelpYJI.org