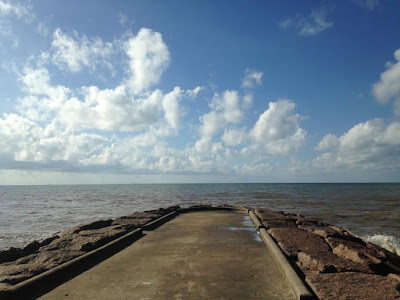 The warm Gulf of Mexico, as seen from Galveston Island, Texas. (Mughda Gurram/YJI)
GALVESTON, Texas, U.S.A. – Out in front of you the Pleasure Pier amusement park extends into the Gulf of Mexico, lit up in changing patterns of neon reds, blues, purples and greens against a darkening sky.

The calming sound of the waves clashes with the din of laughter and chatter coming from the restaurants and
stores lining the street. 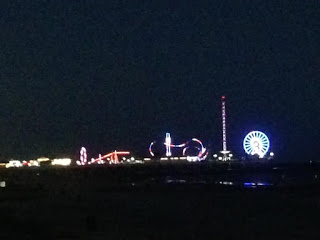 The Pleasure Pier, an amusement park built on a surprisingly  sturdy dock, lights up in all the colors of the rainbow during the night. (Mughda Gurram/YJI)

A small number of people are still on the beach, playing amongst the waves or searching for seashells on the shore. Tourists love Galveston, Texas for its ocean-side experience.
However, people come to the small coastal city for more than just the beach.
According to Stacy Gilbert, Director of Convention Services and the Visitor’s Center in Galveston, tourists also appreciate Galveston’s rich history.
Many of the beautiful houses – The Bishop’s Palace, Moody Mansion, and Ashton Villa, which attract many visitors – played roles in local and state history. 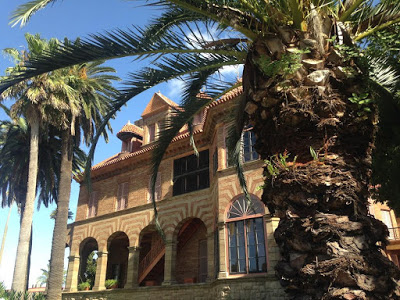 One of the many beautiful historic homes that attract tourists to Galveston. (Mughda Gurram/YJI)

These historical sites housed famous families such as the Moodys, who built the largest American financial empire of their time.

Their houses remain similar to the way they were when first built; because of historic district rules, it’s actually a difficult process for present owners to make any kind of change to the historical sites.
Galveston is also home to a lot of firsts, such as the first black high school, first telephone, and first post office.
This city has enough to satisfy any touristy needs, whether it’s kicking back on a beach chair, or – equally appealing – sight-seeing and visiting the local historical landmarks.
Mugdha Gurram is a Senior Reporter for Youth Journalism International. 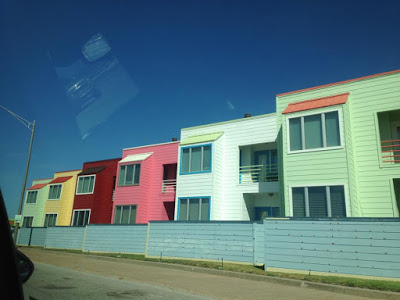 Across from the Gulf stands a line of restaurants, stores, and homes, including these brightly colored beach houses. (Mughda Gurram/YJI)