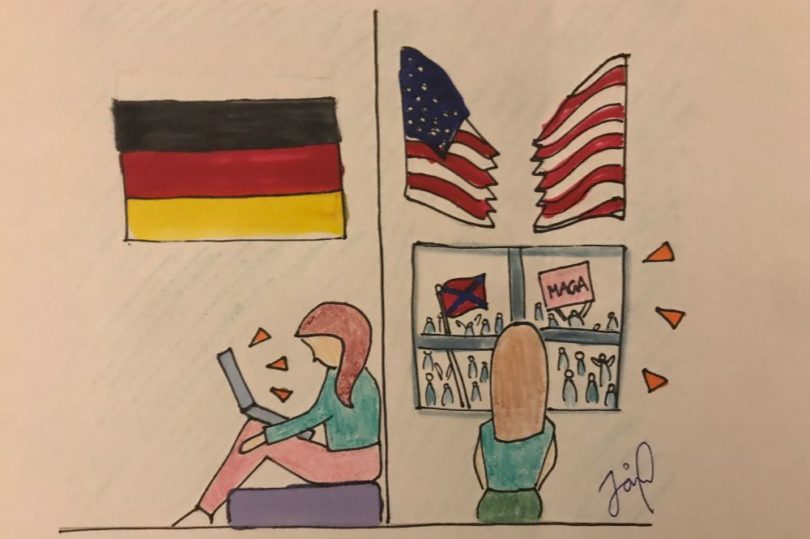 Ludwigshöhe, GERMANY – Looking at the United States from the outside tonight, I am frightened, shocked, and very sorry to everyone who is there, who is innocent and just happens to be in Washington D.C. and has to go through all this.

Things have been difficult. The whole year 2020 was challenging, obviously, and now – just as many people thought that the new year would bring new hope and new opportunities – this has happened.

Those are words that immediately come to mind looking at what’s been going in Washington. But those aren’t the words printed in the media.

I am shocked not only by what is happening but also by how the media covers it. These are not “protests,” they are riots.

The U.S. Capitol has been invaded. A woman has been killed. Yet, online, this does not get as much attention as the peaceful Black Lives Matter protests did. Back then, the police fought against the protesters despite their peaceful movement.

These people are rioting not for a good cause, not for charity, revenge, equality, or fairness – though they might argue otherwise. They are rioting because things did not go their way, because President Donald Trump did not win re-election and still refuses to acknowledge that.

And Trump is unwilling to do anything about the violence, as he told his adviser. Instead, he sent weak messages via social media, asking the rioters to stay peaceful.

On various occasions, I’ve seen Trump being compared to a kindergartener, a toddler throwing tantrums, unable to accept the fact that he has lost a game. Tonight, I saw a few more tweets like that and I have to say that I agree with them.

His behavior is dangerous, unacceptable and unworthy for a president, but also for any grown person with common sense.

It makes me sad to see such a huge, culturally diverse country, which I have always dreamed of visiting, so divided. And though this is not one single person’s fault, I also blame Trump for this and can only hope that things will improve once he is out of office.

Tonight, my thoughts are with the people of the U.S., the victims of hatred, discrimination, and inequality. The people who expected that something like this would happen four years ago but who weren’t heard. The people who belong to marginalized groups, who are struggling right now, as well as the people who still have not and will not lose hope.

I cannot imagine what they are feeling but I keep them in my thoughts and share information so that they are seen, hoping that this nightmare will end.

The future is uncertain, but I cannot wait until I no longer have to hear about the U.S. president’s latest scandals.

Watching the news from Washington D.C. has been a thrill recently, both daunting and strangely funny as it does not directly affect me.

But I’m looking forward to when it feels ordinary again.

Annalena Stache is a Junior Reporter with Youth Journalism International. She wrote this commentary.

Jaime Terada is a Junior Reporter with Youth Journalism International. She drew the illustration.