BRISTOL, Connecticut — At about mid-day on a perfectly normal Friday, I learned of a most horrifying and unnerving crime.

Early in the morning, Father Robert Lysz, the pastor of St. Matthew’s Catholic Church, which my family attends weekly, was apparently bludgeoned to death in the confines of our own house of worship. 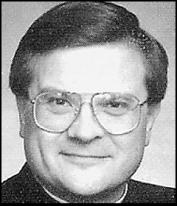 He was found in a pool of blood by some unfortunate parishioners who searched for him after he missed Mass.

My family first heard of this news from a neighbor and then saw it on the television news. I could scarcely believe that the shots of my church with ‘POLICE CRIME SCENE’ tape around it were really being broadcast from where I go to pray every Sunday.

The realization that nowhere, not even the church, is safe anymore, is quite a bitter pill to swallow.

I am apprehensive to jog by myself now, knowing that any number of things could happen to me, all alone, even in broad daylight.

The worst part of this tragedy is that we lost a wonderful human being.

Father Lysz, known to some for his careful fiscal tendencies, and often jokingly
referred to as “Father Cash” was a priest for about ten years.

At the age of seven I can remember him calling up all the little kids (including myself) to take part in a special liturgy. Once I noticed he had a Mickey Mouse watch, which fascinated me, because I had never thought of priests as liking the same things I did.

If you think about it from a kid’s perspective, a huge figure with elaborate robes and a booming voice doesn’t seem very human. I thought to myself that I liked this guy, he smiled really nice, even if none of the kids were listening to him.

Father Lysz was always looking for a chance to brighten someone’s day. Small gestures of kindness often reciprocate a much greater meaning than expected. He knew this.

One instance was when I was about eleven, and he walked by the pew where I was seated and noticed I was frowning. So he put his hand on my face and simply said, while grinning, “Smile.”

I did, and only now do I realize the importance of smiling (even when I don’t feel like it) and counting one’s blessings instead of one’s problems.

Recently, I received my First Communion at St. Matthew’s. Father Lysz was present at the rehearsal and the actual ceremony. It really overwhelmed me that he seemed so heartfelt and filled with pride that we were becoming “Soldiers of Christ.”

As a teenager, words of encouragement and commendation are always appreciated, and it is my belief that many of the other newly confirmed felt the same way.

Father Lysz was a very special person, both in the eyes of God and in the community. When people die, especially in such a senseless and brutal way, others start to lose hope only to replace it with cynicism.

I hope the citizens of Bristol and especially the members of St. Matthew’s Church do not let this act of violence discourage them. Life won’t stop, it might get better, or worse, but the fact is that it goes on.

Instead of devastating the community, I hope this binds us more closely together so that we can remedy the cause of such brutality.

I will never forget Father Lysz, or the wonderful things he did for so many people. And I will wear my Minnie Mouse watch in remembrance of him.

This story was initially published in The Bristol Press.