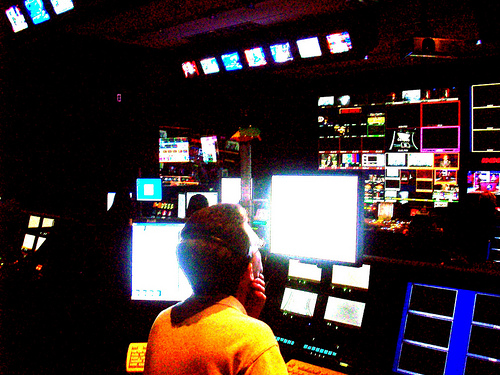 BRISTOL, Conn., U.S.A. – Despite its impressive reputation and fortress-like security, ESPN feels like a welcoming and fun place.
The company recently let down the drawbridge and invited us in for a look around and to write about today’s 30th anniversary. 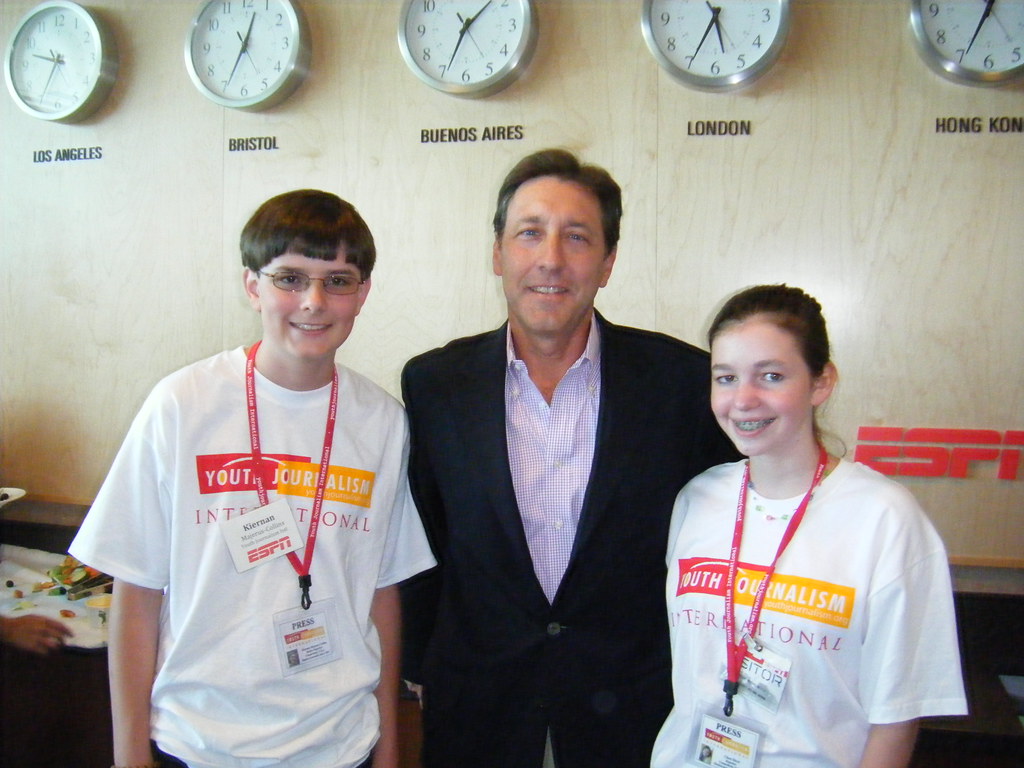 We never imagined in our wildest dreams having this kind of access to ESPN.
George Bodenheimer, the company president, said that a lot people want to find out “what makes us tick.”
“You have to come here to ESPN to do that,” Bodenheimer said.
Since ESPN doesn’t offer public tours and you can only get inside if you’re invited, we’re here to tell you what this castle of sports is like.
ESPN feels like a section of heaven that was somehow left out of the religious books.
Despite all the bad things about sports – namely losing, training, cheating and then lying about it – there are so many good things that we’re all familiar with, except for those cursed Cubs fans.
When we came to ESPN at the end of August, we were both nervous about standing up as journalists. After all, papers as big as USA Today, The Los Angeles Times and The Wall Street Journal were there, too.
But we think we held our own. 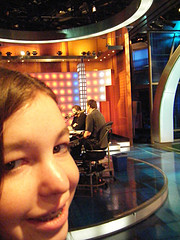 After zipping straight from high school orientation to ESPN’s headquarters in Bristol, we had no time to get settled.
When we walked into the lobby, it was like entering a piece of sports paradise. Any sports fan would just love it there.
Prominently displayed on the walls were Lou Gehrig’s “Luckiest man” speech, photographs of all kinds of athletes and framed covers of ESPN magazine.
There’s probably no other company on earth that is so dedicated to games.
ESPN is a massive place, with many large office buildings and a big multi-story digital studio. The buildings are connected by indoor walkways high above the ground, and small buses carry people from one corner of the campus to another.
On our tour, we got a chance to see several of the studios and the big newsroom.
No matter where we went, it was just sports everything, everywhere.
In the main lobby, the first thing we noticed were the four HD flat screen TVs. One showed ESPN, another had ESPN2, another had ESPNNEWS, and we forget what the fourth one had. We were too busy looking at the carpets, walls, reception desk and trophy cases.
Everything, from the sinks in the bathrooms to the grass growing outside, was sports.
We saw championship wall hangings, ranging from Florida State to the Boston Red Sox. The carpet in one long hallway looked like a football field and a photo collage on the wall alongside completed the look.
In a conference room, an arrangement of photos made up a world map on the wall, with the sport shown in the picture coinciding with the country. That room also had five clocks with times from around the world, ranging from Hong Kong to Los Angeles to Buenos Aires to Bristol.
In the ESPN Café, there was a basketball court floor, and right outside, there was a real basketball court, where, we were told, there are intense ESPN employee league games. The court even has an ESPN scoreboard. 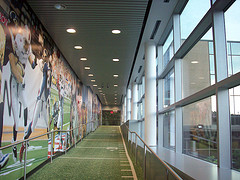 A hallway at ESPN. (Clare Hern/YJI)

Bodenheimer was the guest star at our media luncheon. We both thought that he was the nicest “media company” president we’ll ever meet. Throughout our two days at ESPN, we heard nothing but the highest praise for him. But that might be because he’s the boss. However, he was a very warm, welcoming guy.
One of the most memorable things we got to do at ESPN was to see part of a Mike and Mike show live.
Co-host Mike Golic was even friendlier than we expected, and Eric Kasilius, who was filling in for Mike Greenburg, was personable as well.
Perhaps kindest of all was Bill Rasmussen, the founder of ESPN, who had dinner with us one night. He treated us not as guests, but like part of the family. Maybe that was because he was a guest at ESPN himself. 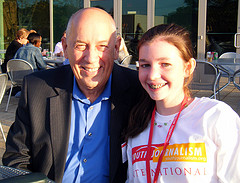 In talking with Rasmussen, one thing that really astounded us was how much ESPN has grown.
We were amazed to learn how small ESPN was when Rasmussen started it, compared with how huge it is now.
When Rasmussen formed the company in 1978, he told us there were only three people involved. Now there are almost 6,000 employees worldwide.
And that’s exactly the point: worldwide. ESPN has operations in many countries and viewers all over the globe. It’s really an incredible company. But what’s so impressive is that people all around the world have heard of Bristol, Connecticut because of ESPN.
Before ESPN started broadcasting in 1979, Bristol was just another town, but now it’s known all over the world because it’s home to ESPN.
Bristol must be important to ESPN, considering that as much as they’ve expanded elsewhere, they haven’t moved from their base to a larger city.
It works both ways, though. ESPN is important to Bristol as well. It’s a great asset to the town. ESPN is the biggest employer and by far the biggest taxpayer in Bristol.
One thing we found very amusing was how people tell phony stories about why Rasmussen chose Bristol for ESPN.
Rasmussen told us that people said he did all these scientific studies and lots of research before choosing his spot. But in reality, it just turned out that satellites were illegal in the nearby town of Plainville, where he had an office.
So a friend told him about this plot of land in Bristol, and the rest is history. 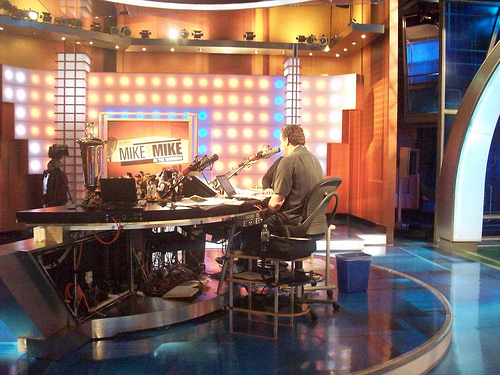 ESPN host Mike Golic and the set of “Mike and Mike.” (Clare Hern/YJI)

Bet those people from Plainville regret it now, huh?
It was so cool to meet all of these important people – the founder of ESPN, the president of ESPN, broadcasters Chris Berman, Bob Ley and Mike Golic – but we also enjoyed talking to lots of other people from ESPN who may not have household names but play an important role there.
We were constantly commenting in awe about how great it was to see this or watch that, but as avid sports fans, getting a tour of this place is just, well, awesome.
Everything from the outdoor football field in the middle of the campus – we had a blast racing towards the ESPN end zone – to meeting Berman was something special.
Bodenheimer said that to really know ESPN, you’ve got to see it for yourself, which is certainly the best way.
Since visiting, we now have a different perspective on the company, a better understanding of what’s kept it going these 30 years. The atmosphere there is something that’s hard to explain, but we’ve done the best we can – at least until they let us move in.
All in all, ESPN is as stunning as loyal viewers imagine it. However, there is a personal side, a friendly, caring side, that doesn’t come through on camera. ESPN really showed us that it is a company with class, character and a great sense of sports.
The two unbelievable days we spent there are ones we’ll never forget. 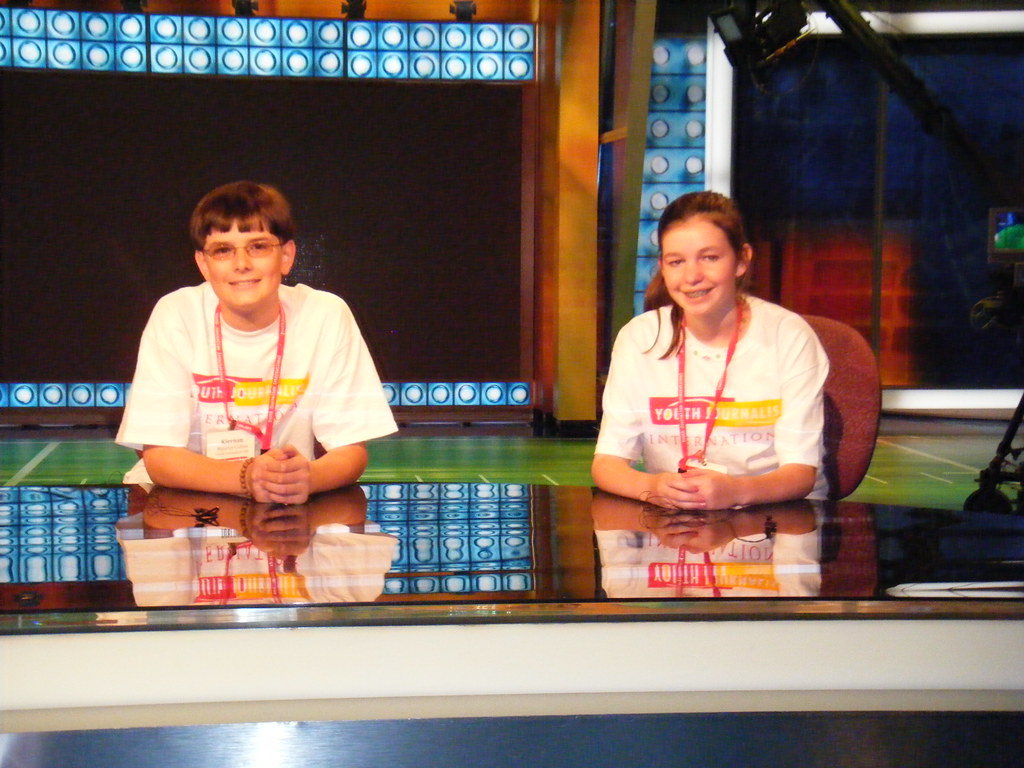 Kiernan Majerus-Collins and Clare Hern behind the host’s desk at ESPN. (YJI) 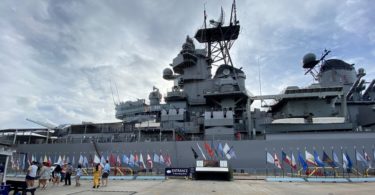