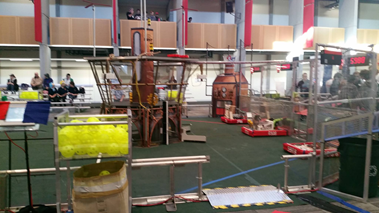 The competition field at Macquarie University in Sydney, Australia during the 2017 Duel Down Under Tournament. (Alyce Collett/YJI)
MELBOURNE, Australia – STEM. It’s the buzzword at the moment. Well, buzz acronym.
With the changing nature of careers, STEM (Science, Technology, Engineering and Maths) is now being pushed more and more into schools in Australia and around the world. Despite this push, not many students – especially girls – are taking up these subjects.
One organization that is trying to solve this problem is FIRST, which stands for For Inspiration and Recognition of Science and Technology. Using a progression of programs from Lego leagues to robotics competitions, FIRST aims to inspire students from the age of six to 18 to take up subjects in school and later a career in a STEM field.
I got involved in robotics after I saw how much fun my best friend was having on the I. C Robotics, a community team from Melbourne’s eastern suburbs that competes at the highest level.

I. C Robotics began out of the minds of kids who were too busy dreaming of what could be, to think about what couldn’t be. Ben Jessett and Liam Stow, two boys at Yawarra Primary school in Boronia, Victoria, started the ‘Inventions club’ during their lunch times, dreaming of problems and then solving them.
They roped in parents to teach them the skills they needed to make their dreams, no matter how small, a reality and began competing in 2012.
I.C Robotics is now an incorporation with 17 student members and a number of parent mentors as well as mentors from
industry partners such as Ford and BAE Systems.
As well as creating robots for competition, I. C Robotics does a lot of work in the community promoting STEM and FIRST.
The team, which still includes Stow and Jessett, connects with the community through participation in a local event called the ‘Stringybark Festival,’ by running Robocamps at a local library and a Robotics in Schools program.
The Robocamps, which run on weekends and school holidays, are designed to educate students about basic programming, robot building and game strategies. In the after school program, kids learn robotics coding and mechanics, leadership, problem solving and teamwork.
“As well as engineering skills, IC gives the kids in the team life skills and gets them excited about STEM in a way that sport excites them,” said Marty Stow, a parent who serves as a mentor in the program.
The FIRST program helps promote STEM in a fun way, but also includes positive things that aren’t just about robots and
STEM.
“FIRST is a gateway to learning self-confidence and leadership,” said Meg Stow, a youth mentor with IC Robotics.
The way that they do this is engaging students worldwide in a friendly competition set out like a sports match.
In robotic competition, teams of students design, build and program a robot that is designed to complete a set of missions within a larger game. This game changes every year, but the general aim is still the same, no matter what the game is or which program it is.
“The FIRST program sets kids up for the future which can look scary,” Marty Stow said. “It gives them confidence, teaches teamwork, encourages humility and allows them to take the future on headlong.”
STEM is not just confined to the classroom or workplace. It’s right in the heart of the community. Students of all ages and genders are getting involved in STEM, and getting excited by it.
It may take some time before the eagerness of the younger children translate into uptake of STEM subjects and careers, but it will come.

***
You can help young people have a voice with your
tax-deductible donation to Youth Journalism International.
Thank you!
HelpYJI.org