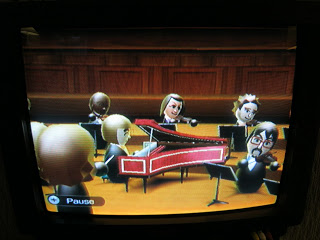 By Robert Guthrie
Junior Reporter
Youth Journalism International
DUMFRIES, Scotland – Wii Music, a user-friendly game for the Nintendo Wii provides players with the experience of playing musical instruments without actually having to know how.
This Nintendo Wii Game, which came out in 2008, has a Pan European Game Information rating of “3” which makes the game suitable for almost every age.
A PEGI age rating system, which ranges from three to 18, tells the minimum age required to purchase the game and guidance about the suitability of the game for different ages, but does not indicate the level of difficulty.
One of the activities is Improvisation.
Your Mii (an animated character of yourself, for anyone unfamiliar with the console) can be used to pick an instrument, and then play along with “The Tutes,” a computerized backup band.
This means that you can play in a randomly picked and exciting style. The Tutes will pick their instruments randomly, based on how you play in the first few seconds. As one Tute plays, another will join in until you and all six Tutes are there.
Another feature is Jam Sessions, which involves you and your Mii playing a certain song from the playlist.
With a selection of more than 70 instruments, the user can play songs on an instrument of their choice. You can unlock stages to play them on by doing lessons, and as you do a lesson on a certain style, you will unlock instruments that go with that style. For example, if you learned rock, you might get the drum set and the guitars, and so on with all of the other styles.
In the Jam Sessions, you can choose from five different parts: melody, harmony, bass, chord, and percussion. Obviously depending on the part you select, you’ll get a selection of instruments for that part.
After you have successfully completed the song, you will be given the opportunity to save a video of what you did.
You can design a sleeve to keep the CD in, and then at the end, you can review your performance, and identify parts of the music you may want to improve on. Videos will be stored in your library, so you can show off to your friends and family what you have been doing.
An important feature in Wii Music is Lessons. These are a great way to come to grips with your instruments and styles of music. You need to know nothing to play the game or do the lessons. They’re easy to learn and step-by-step.
In lessons, you can select a style of music, and learn the instruments in that style. Once you have perfectly completed a lesson – approximately six steps – you’ll receive the stages and instruments that go with that style.
Don’t forget that you may need to do a lesson more than once to get perfect marks and be a whizz-kid at the style, and at any point you can re-do the lessons to improve upon your performances.
You can view your videos on the menu at the start and you can send them to friends, too.
As well as jamming and lessons, you can also play up to three mini-games. “Open Orchestra” involves conducting an orchestra with the Wii Remote at a good, steady speed. Try to aim for 100 points!
In “Handbell Harmony,” you play handbells to a piece of music. You can use the Wii Remote and Nunchuk to do this, and as the coloured bell symbols pass the line, shake one of the two bells you are holding to play the music successfully. You will have three other people, playing the six other notes in your team, to help you.
In the third game, “Pitch Perfect,” a player listens to a sound clip and then click on the instrument to identify which one was playing.
You can progress on levels and it’s a way to unlock instruments and stages. But be careful, as it is really easy to be tricked.
The last feature is Drumming. If you have a Wii balance board, too, you can do drumming lessons. Use the Wii balance board to control the two pedals on the drumkit, and then the nunchuk and Wii Remote to hit the toms, hi-hats, and snare drums.
It’s similar to Jamming, except you’re playing the drum part and you can see the audience bopping up and down.
I would recommend this really easy to use game to all ages of players. No matter your age, you can still express your interest in music, and it’s good for anyone who wants to get started in music.