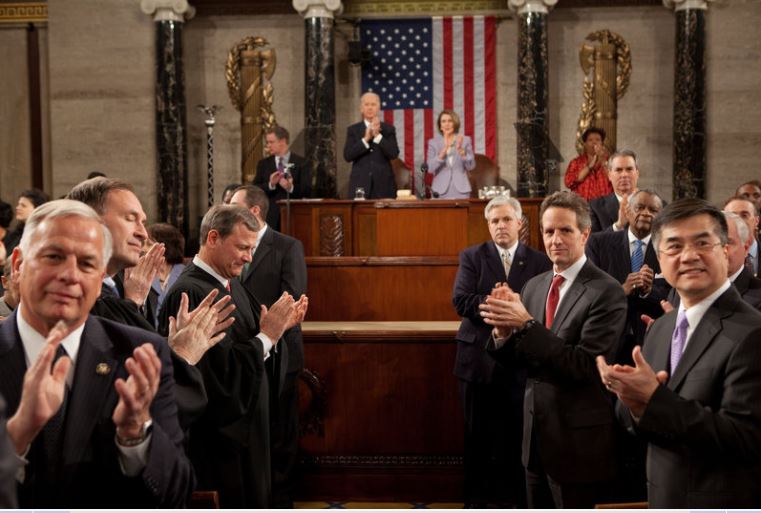 (White House photo by Pete Souza)
GLENWOOD, Iowa, U.S.A. – Politics, speeches, Congressional meetings. What does this mean to a teenage girl who does not even have the power to vote? Or to the majority of
children and teenagers who are not yet required to know about the laws of the United States?
The end of President Barack Obama’s time in office is nearing.
In November, citizens will vote in a new commander in chief. And this new commander in chief will make the choices that affect how upcoming generations live and how they will react to politics.
Obama gave his eighth and final State of the Union address Tuesday night, carrying on a long presidential tradition that dates back to George Washington, though the first president to deliver a speech in person was Woodrow Wilson. Before that, presidents simply sent over a written report each year.
Known as the State of the Union, it’s a big event now, with special guests and millions tuning in to watch.
In a State of the Union address, the president makes a statement on our country as a whole and as the commander-in-chief, it is his chance to present his overall plans for the upcoming year.
Obama began his speech with his natural sense of humor, promising to “make it a little shorter” since he knew “some of you are antsy to get back to Iowa” where presidential campaigns are in full swing.
Then he turned his speech into a piece of art, highlighting his own goals for 2016 and the trials of the United States over the course of our history.
“America has been through big changes before – wars and depression, the influx of new immigrants, workers fighting for a fair deal, movements to expand civil rights,” the president said.
No matter who holds his job next year, the country has “four big questions” to answer about its future, Obama said.
The first question, he said, is how can everyone get a “fair shot” at opportunity and security in this new economy.
Second, Obama said, is how can the country make technology work for us, especially when it comes to solving urgent challenges like climate change.
How can we keep America safe and lead the world without becoming its policeman is the third question Obama posed.
Finally, the president said, Americans must decide how we can make our politics reflect what is best in us, and not what’s worst.
As an American teenager – one day to be an American voter – the next president my country elects will make choices that will affect my future, in ways good and bad.
The future that Obama was talking about will be the future for my generation – and for the generations that follow. It will help determine how we choose to build on what we have now.
That’s why his last State of the Union address is not just another speech.
Garret Reich is a Reporter for Youth Journalism International.
***
Your tax-deductible contribution helps support students
served by this non-profit. Thank you for giving!
www.HelpYJI.org