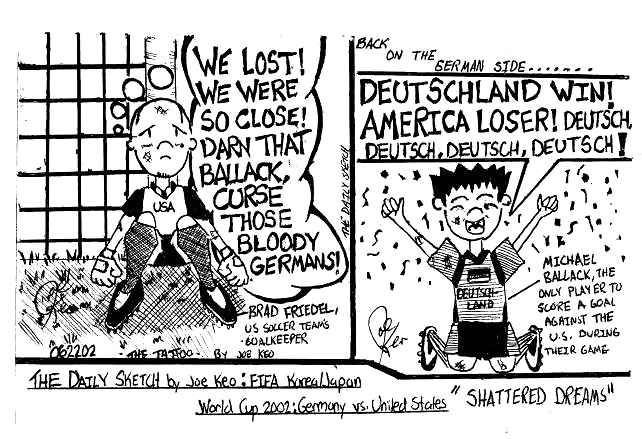 BRISTOL, Connecticut, U.S.A. — The sport is called football everywhere else in the world, but here in the good old United States we like to call it soccer.

The Fédération Internationale de Football Association’s World Cup, held every four years, determines which country will prove itself as an elite in the football world.

It’s a craze throughout the world, and this year, South Korea and Japan are hosts for the World Cup.

Even though the World Cup takes place in the Far East , back in the West many loyal soccer fans are still raving and going wild over the popularity of football. The World Cup has generated such a buzz all over.

As an American, I wanted the U.S. team to win the World Cup, but unfortunately, due to Germany’s win over America, that desire has evaporated, but I still had my eyes glued to the television.

With the U.S. out of the picture, my next choice to win was the South Koreans.

But once again the Germans had to come in and ruin my day by defeating South Korea 1-0.

You might think that ended my reign in front of televisions set, but I’m still in the game.

I stayed in front of the screen and watched the rest of the remaining matches.

Not only am I still attracted to the game of football, I’m also pulled in by the traditions and commercial attention that surround the universal sport.

For example the traditional jersey swap at the end of a game is very confusing to me. Who in the right state of mind would want the sweat and stench of the opposing team? It’s just not sanitary.

They must have lots of spare jerseys in the locker rooms or something and they needed to get rid of them, who knows?

Another tradition that interested me is the goal-scoring celebrations.

When football (that is, soccer) players score a goal, the fans go wild and the player feeds off the energy by doing funny and weird antics and dances.

I’ve seen guys do the worm, a dude doing back-flips, and another guy just looking like a complete baboon running with his jersey over his head (how can he see?)

The commercial attention of the World Cup is also wild and crazy.

As we Americans do with the Super Bowl halftime, the rest of world does with the World Cup halftimes.

Many billboards and ads are displayed in and throughout the host countries. Hyundai, Coca-Cola, Gillette, McDonald’s, Master Card, Toshiba, Nike, Adidas and others were among the plethora of sponsors trying to get noticed during the World Cup.

On television, commercials clutter the screens at every halftime.

One set of commercials that sticks out in my mind is the one by Adidas about a new epidemic called “footballitis” where everyone was addicted to football and everything related to it. The commercials showed scientists researching and trying to come up with a cure for “footballitis.”

The ads were just plain hilarious. What’s funnier than seeing grown men running around with their shirts pulled over their heads?

Now that the World Cup is over, football fans will have to wait until 2006 when Germany hosts the next championship tournament.

Though the World Cup is mostly about competition, it thrives on nationalism.

Win or lose, at the end of the day we all take pride in our homeland.

Joe Keo is a Reporter for Youth Journalism International.