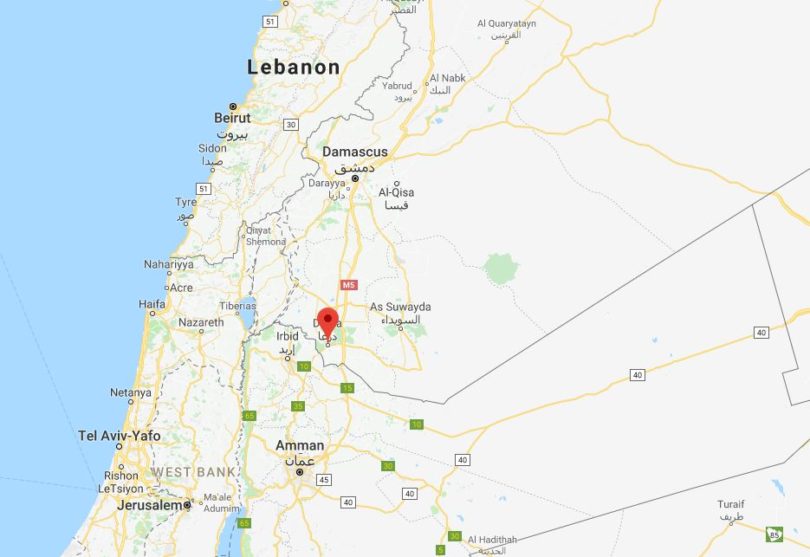 TORONTO, Canada – Fifteen kids in Daraa, Syria wrote on a wall, “Alshaeb Yureed Isqaat Al-Nitham” meaning the people want to overthrow the regime and on March 6, 2011 they were arrested by Syrian security forces and taken away from their homes and their families.

The 15 boys, between the ages of 5 and 15, were detained under the control of Gen. Atef Najeeb, one of Syrian President Bashar al-Assad’s cousins, and were brutally tortured during interrogations. They were all beaten and bloodied, burned and had their nails pulled out by men working for Bashar al-Assad.
After several public protests, where protesters came under fire from Syrian security forces, 14 of the 15 kids were returned, all bearing scars and marks of torture. The 14 kids that made it out alive all had disfigured faces, cigarette burns all over their bodies and pulled nails but they were still lucky, because one of their friends did not return and was presumed dead under torture.

This is the true face of al-Assad and this is what his regime represents. The uprising in Syria that started more than a year and a half ago is not a civil war and it is not a sectarian war.
It is a revolution for freedom to end injustice and the oppression of Syrians under al-Assad, a dictator and mass murderer, and nearly 50 years of Ba’ath Party rule.
Since the start of the Syrian revolution, al-Assad’s regime has continued to use aggression and violence against its own people, indiscriminately shooting and killing thousands. Many attacks have also included house-to-house raids and Syrian security forces have gone as far as using warplanes, tanks and heavy artillery, destroying villages, towns and cities by bombing and shelling.
In 1982, Bashar al-Assad’s father, Hafiz al-Assad, was responsible for the Hama massacre, killing as many as 20,000 people in Hama, Syria. Like father, like son.
Bashar al-Assad is considered the worst mass murderer of the Arab Spring. Aside from the killings, mass murders and systematic use of violence, numerous other human rights violations have been committed by his regime, including mass arrests, abductions, enforced disappearances, detention of civilians, acts of torture, degrading and inhumane treatment, deprivation of food, water, medical supplies and denial of access to hospitals.
Children are chased down and told to kneel by Syrian security forces to be shot dead. Civilian patients inside hospitals are left to bleed to death or are killed by lethal methods. Soldiers are shot from behind when they refuse to kill civilians.
People are shot dead in their homes or taken by Syrian security forces. Civilians are snatched from the streets by Syrian security forces. Many are detained in prisons and secret detention centers and brutally tortured using horrific interrogation techniques. Most die as a result.
Women and girls are raped in their own homes. The list goes on and on and these crimes against humanity are just a glimpse of what the Syrian regime is capable of. It has been more than19 months since the beginning of the Syrian revolution and it is clearly evident that the situation there escalated a long time ago, but as al-Assad tortures and slaughters thousands of Syrian citizens and takes away their human dignity, the world continues to stare in silence.
The United Nations stands neutral in this situation of gross injustice, allowing the murdering of innocents to continue. By standing by, we are all just passively protecting the interests of countries like Russia and China and siding with the oppressor.
Since the beginning of the revolution, almost 40,000 people have been killed in Syria, nearly 35,000 of them civilians. As many as 28,000 Syrians have disappeared, possibly abducted by Syrian security forces.
More than 325,000 Syrians are forced to live as refugees in Turkey, Lebanon, Jordan and Iraq and as many as 2 million Syrians have been internally displaced.
The Free Syrian Army, the main armed opposition fighting Assad and his regime, is mainly composed of defected members of the Syrian Armed Forces and volunteers. It seems to be the only force fighting for the rights of the Syrian people.
Imposing sanctions on al-Assad is not enough international pressure to save innocent lives in Syria. To begin with, efforts have to be made to aid the Free Syrian Army in overthrowing the regime, even if it means supplying them with weapons.
A no-fly zone over territory held by the Free Syrian Army has to be imposed. Due to a lack of support that Syria is receiving from the UN, the Arab League also has to play a larger role in assisting the Free Syrian Army. We all have to fight for the freedom of Syrians and hold al-Assad accountable for his crimes against humanity, because no one in this world is free when others are oppressed.
This dictator must be brought to trial as a war criminal for torturing and murdering thousands of innocent Syrians.
Let’s not prove that there is less than 1 percent of humanity left in us. We must demand a free Syria where everyone is treated with respect and dignity and is equal, whether they are Sunni, Alawite, Kurdish, Christian or part of any other group.
Lakhdar Brahimi, the UN-Arab League special envoy to Syria, appealed for a brief ceasefire during the recent Islamic festival of Eid al-Adha, but instead of being a step toward negotiation and freedom for all Syrians, the killing continued.
Amidst all the destruction and sorrow, I pray that Eid brought at least some happiness and peace to Syrians suffering under a tyrant’s rule. There is a verse in the Quran that says, “Through hardship comes ease.” The Syrian people have suffered many hardships under al-Assad’s oppressive regime and have lost everything, but one day, God willing, Syrians will have freedom.
Mehran Shamit is a Senior Reporter for Youth Journalism International.