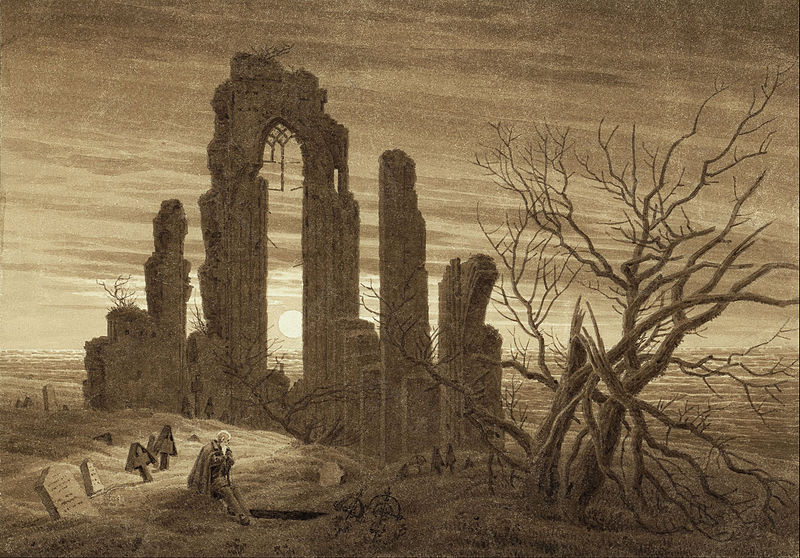 1803 painting by Caspar David Friedrich
SEOUL, South Korea – It is questionable how much a 16-year old can discuss life or the absence of it.
I’ve not yet lost a close relative. I cannot fathom the emptiness in the lives of those left behind, nor am I close to understanding the deep meaning of life or its end.

The only thing I do know is that I am afraid of death. Unfortunately, the Sewol ferry tragedy has neither enlightened me with a justification for the sacrifice of innocent individuals nor taught me how short or long life is. Rather, it has exacerbated my fears of death – and of something scarier I hadn’t thought of before – being forgotten.
Thousands die annually in car accidents or of old age – thousands that were the dearest family members to someone or the true love of someone’s life. Yet the statistics never triggered my tears or fears.
The numbers remained numbers on paper because they had no proximity, no personal connection that could break down the distinct barrier between ‘their lives’ and ‘my life.’

The barrier had shielded me from harsh reality and had done so very well, until the Sewol ferry sunk, and pulled me out of my refuge.
For the first time, death seemed real. The victims were not nameless individuals on the newspaper, but friends of my friends – students no different from me.
A friend of mine had a last-minute change in plans to attend a different high school than the one we now see in the news. Her sister graduated from the affiliated middle school and had been classmates with most of the students on board.
Above all, most victims were just teenagers and students who shared the exact same emotions and routines as I do.
Just as I get excited for school trips, just like how I anticipate my uncertain future, and just like how I am an irreplaceable daughter of a family, they were, too.
I realized that there was nothing that made me more deserving of life than they were. I was simply lucky and the others, unfortunate. And if their tomorrows could simply not come, mine too, could.
The fact hit me: death is scary and it is as ready for me as it was for the hundreds of other innocent young people on the Sewol.
I had inadvertently perceived myself as somehow immortal – immune from death. But I, too, will lose people around me and one day I will be lost from their lives.
What scared me the most, however, was not the constant threat of death, but the aftermath: whether people will still care to remember me.
The Sewol sinking resurged searches and attention on past tragedies like the  such as the ROK Cheonan sinking four years ago and the Cheongju Cruise Ship Fire in 1994 – events that had not been prioritized in our memories for years.
The horror of the Sewol overshadowed the terrible collapse of the Gyeongju Mauna Ocean Resort Gymnasium collapsing on top of college students only three months ago.
In the test of time and in the wake of greater news, tragedies and their innocent victims often slip away from our minds as we turn our attention to the next event, despite the fact that the families left behind are still yet to recover.
In less than a month since the accident, the top searches of the moment of major Korean search engines have shifted away from the Sewol ferry to other events and celebrities.
I’m no different. No matter how many times I declare my hopes of helping those in need, my resolves are forgotten when I’m faced with exams or anything demanding immediate attention.
We do not mean to neglect, nor were our condolences insincere, but we do somewhat forget. Life continues on like calm waves after a storm, as if nothing happened.
When asked how watching the breaking headlines transition from hundreds missing to hundreds dead and their grieving parents, the 16-year old would confess that she learned
fear.
At the same time, I still cling to the hope that their deaths, as well as my own at some point, will not be a natural part of life, but a sacrifice to spur change for the better.
Heejin Evangeline Hong is a Junior Reporter for Youth Journalism International.