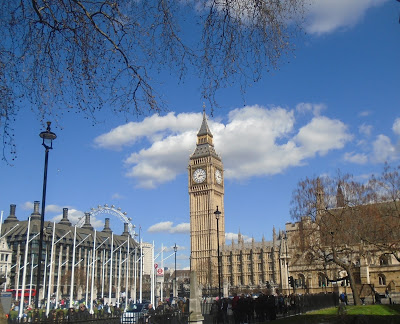 The British House of Parliament in London. (Yelena Samofalova/YJI)
AMPTHILL, United Kingdom – When my country goes to the polls May 7 to choose leaders for the next five years,

On the 7th of May the United Kingdom are having a General Election, to pick our members of parliament for the next five years. Unfortunately I am about 6 months too young to vote, but all of the recent discussion around politics has made me extremely interested in the impact I could still have.
A new generation of voters who are fed up with the old system might just be able to change the fate of the country, in principle anyway.
At our last general election, in 2010, voter turnout was about 65 percent. That may seem like quite a lot but, in an established ‘democracy,’ you would think that more people would care about their right to vote and bother to turn out and make a difference.
Too be fair, I hardly blame those who don’t vote.
It’s difficult to see what difference one vote can make among many others, and among young people, it seems quite futile, as we never get our voices heard.
Many of us might wonder what good it is bothering to vote for grumpy, old, white men who never seem to take into consideration the needs and ideas of a large percentage of the population.
I’ve never actively been taught politics at school. The only reason I have the knowledge that I do is because of an angel of a teacher who realized that he was sending children out into the world without any preparation.
Before last year, I had no idea about any types of voting system or why we mustn’t always listen to the opinions of our parents. I didn’t really have any interest in the future of my country.
Mandatory lessons on politics would help to increase the number of people who turn out to vote. Learning about the policies of the various political parties and actively encouraging discussion around the topic might actually make young people take an interest.
I strongly believe that it is our right to vote, not just because we have the right to a democratically elected parliament, but because we owe it to those who are unable to have it themselves.
Not voting is an insult to those who have struggled to get themselves heard above corrupt officials or patriarchal dominance. We have to believe we can make a difference to the future of our country so we can honor those in many parts of the world who don’t have that right.
Luckily enough, not all hope of generating excitement is lost.
A wonderful teenager called Abby, who is on Twitter as @twcuddleston but does not make her last name public, has recently taken Twitter by storm with her introduction of the #milifandom. It’s a play on words, introducing her support for the Labour Party leader Ed Miliband.
Behind the tongue-in-cheek nature of the hashtag thrives a community of youth who are appalled at the lengths the media and opposing parties will go to discredit prime ministerial candidates.
These young people are actively trying to get their voices heard and create a sense of realization that we need to change the way we view politics.
In the UK we have geographic constituencies, in which the inhabitants elect representatives to the Houses of Parliament. I think it’s fair to say that the youth in my constituency are more invested in the future of our area than most.
Last year, our Member of Parliament Nadine Dorries appeared on a reality TV show – without the permission of her party, the Conservative Party – and lost a lot of support from her constituents. This is not her first scandal, either.
This may make it seem like Dorries does not have a chance of getting re-elected, but the area is extremely middle class, which means that the majority of voters are conservative. Therefore, without the influx of new voters, this part of the county will not be able to swing the vote and find a more suitable candidate.
My school is known in our area for students speaking out for what we believe in, mostly using Twitter as a battleground. Dorries was notified of our opinions and while she refused to come and speak with us personally, students and others noticed that she was affected by just how much we cared about the area we live in.
This is just the start of a small political revolution happening where I live.
Just last week a group of my friends picketed a meeting that they knew involved a party that wanted to implement policies that they opposed. I was ecstatic to learn that people my age were taking an effective approach towards getting their voices heard.
This is only a taste of what might happen if we bother to educate those who will someday run the country.
With people like Abby and my friends championing their right to free speech and inspiring others to do the same, the youth of today have a real chance of changing the world for the youth of tomorrow.
Erin Ashby is a Junior Reporter for Youth Journalism International.
***
Your tax-deductible contribution can help support Erin Ashby
and other students at this nonprofit:
www.HelpYJI.org