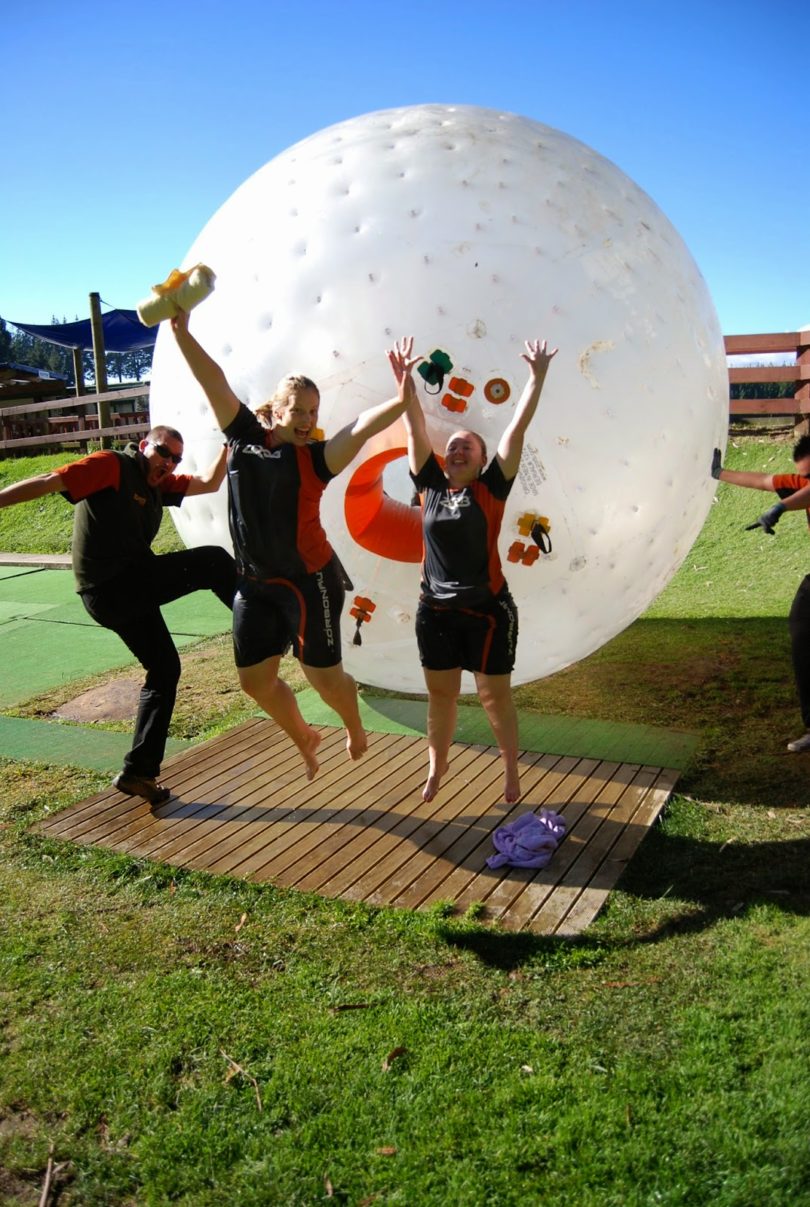 Beth Pond, center, and her friend Chelsea Saccu, right, celebrate after experiencing zorbing in New Zealand while zorbing attendants steady the orb. (YJI)
ROTORUA, New Zealand – Little did I know that a town that smelled like rotten eggs would be the site of one of the most memorable things I’ve ever done.

There I was, sitting in the back of our tour bus, plugging my nose in an attempt to prevent myself from getting a whiff of sulfur, when I saw it for the first time. 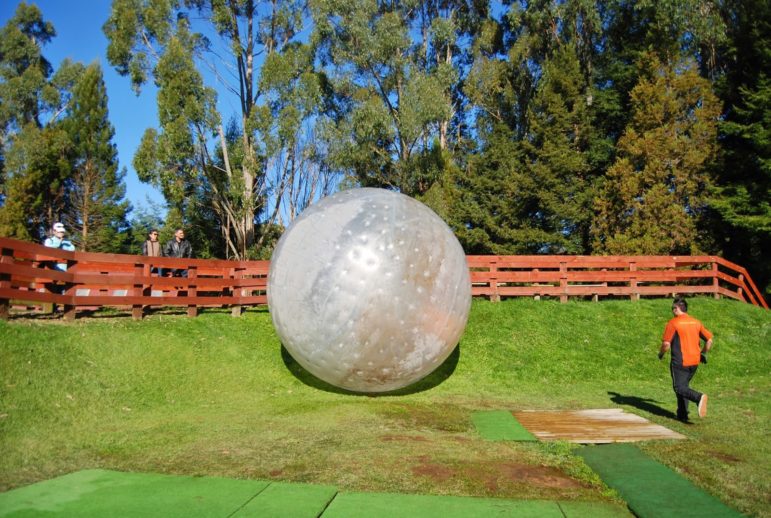 At first glance it looked like a headache waiting to happen, but something about the picture of a guy in a giant ball that piqued my curiosity.
After seeing another advertisement, I was hooked. I’d found the silver lining of spending two days in an odorous geothermal area.
Moments after changing into my zorbonaut gear – a special fast drying outfit – my friends and I were crammed into the back of a van, flopping about, while being driven up a very bumpy hill.
The cool thing about zorbing is that you can do it alone or with one or two other people.
The eight of us divided up into two groups of three and one group of two. Three zorbs were brought up to the top of the hill on a conveyer belt and placed in gates, so that they wouldn’t move when we dove in. 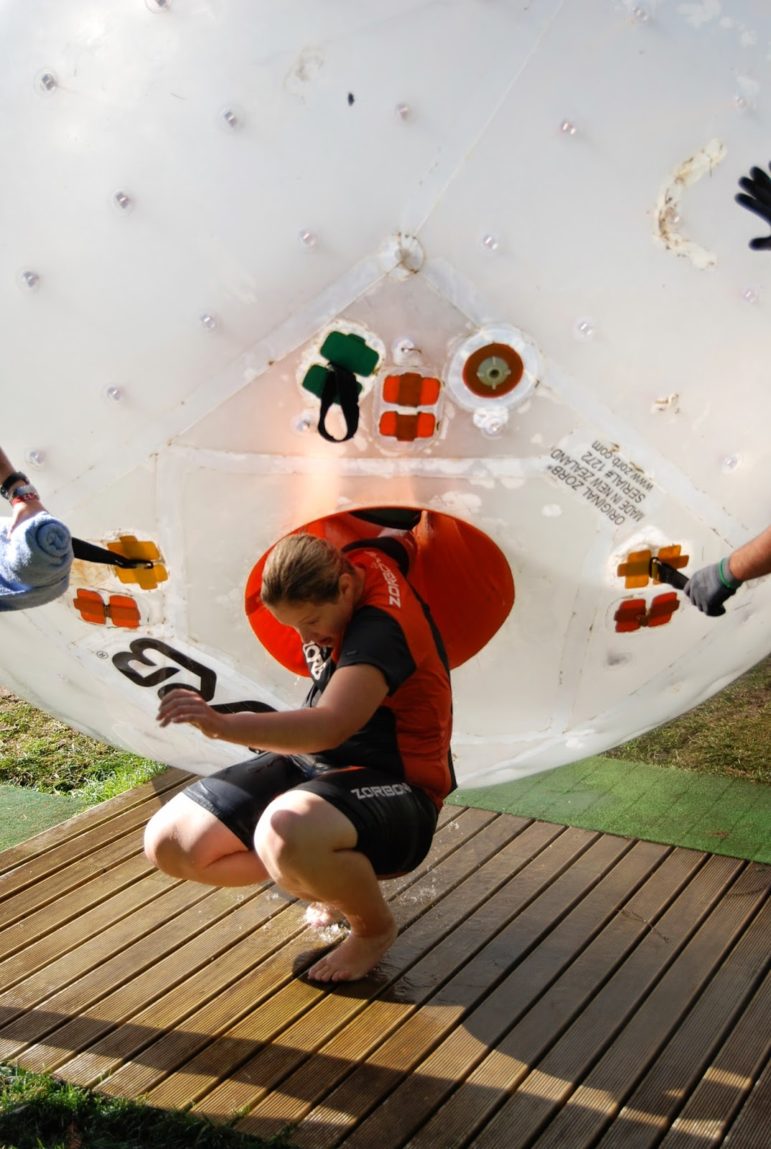 “Zorbonauts” like Beth Pond enter and exit the orb through a round hole in the ball. (YJI)

Up close, the zorbs resembled large, opaque, inflatable balls. In order to get inside, you have to dive in through a round hole on the side of the zorb. We did hydro-zorbing, which means that there is a small amount of water in the bottom of the zorb. It was winter in New Zealand, so the water was warm, very warm in fact. 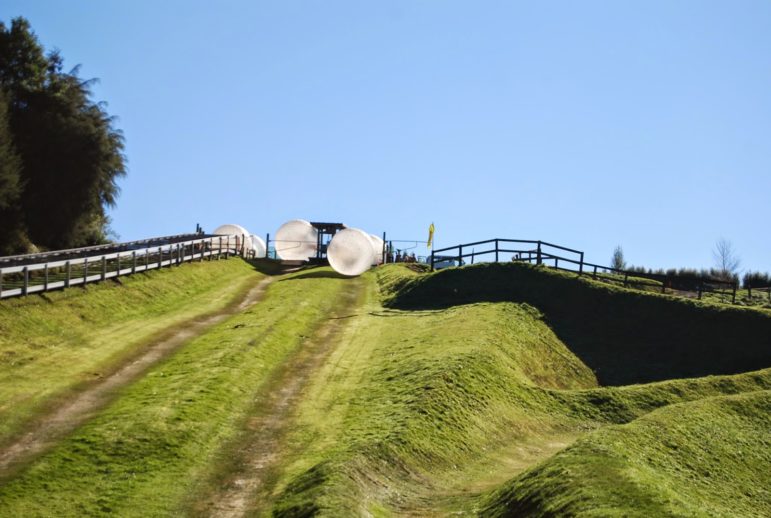 And they’re off! The zorbs begin their roll down the hill. (YJI)

My friend Chelsea and I were the last of the three groups to go, so we had the longest wait in the zorb. We lounged out in the pool of hot water, giggling with anticipation.

The ride attendant came over and told us to stand up, so that once he sealed the door we could begin walking to give the zorb momentum. We couldn’t see anything, which heightened the mystery of the experience. The two of us began walking, pushing the inner wall of the zorb, almost like two hamsters in a wheel.

Neither one of us managed to stay upright very long. We began sliding about inside the ball. I was on my back for most of the ride, not tumbling around doing flips like I had originally expected. Going down the hill in the zorb was sort of like what I’d imagine being inside a washing machine is like. The two of us slid about. The water sloshed underneath us, lubricating the zorb. 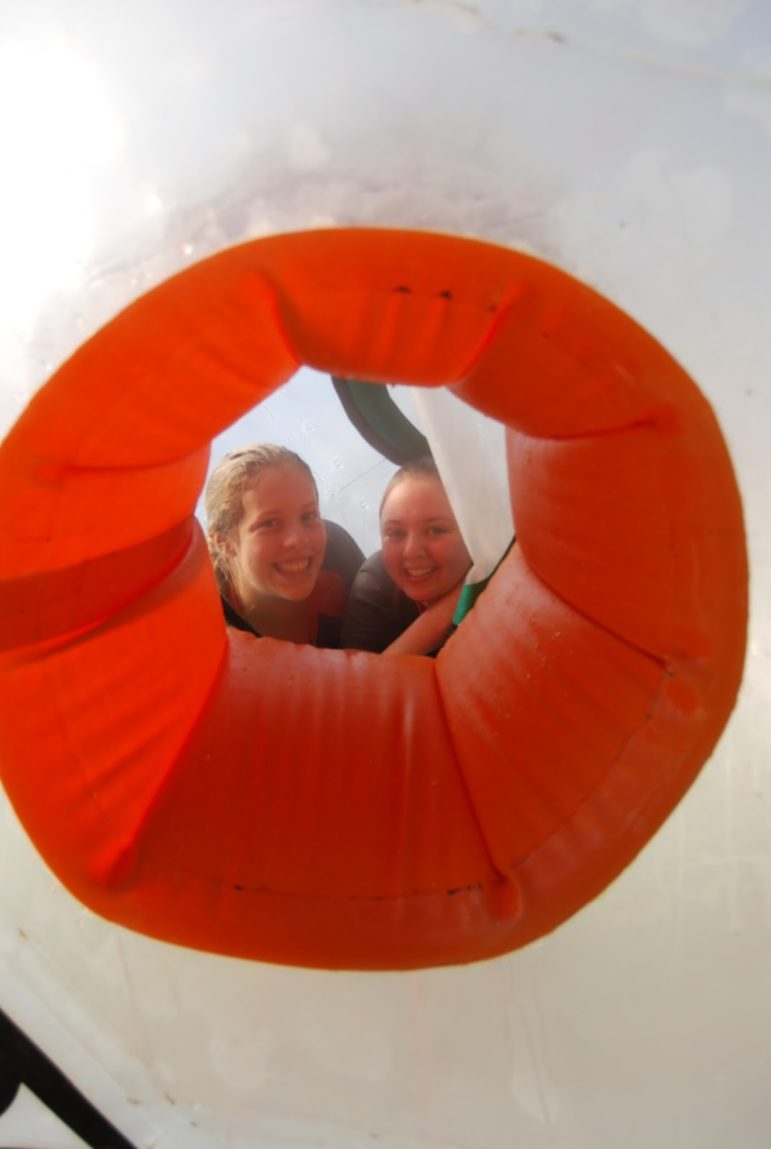 Inside the zorb. Beth Pond and Chelsea Saccu had a great time. (YJI)

Our laughter echoed inside the zorb as I somehow managed to end up on my stomach, facing in the opposite direction. To my relief, the two of us had plenty of room and weren’t constantly colliding into each other like we might have if there was a third person with us.
At the end of the ride, the attendants tilted the zorb, so that Chelsea and I could slide out through the door. We then caught up with our friends, who had all ridden down the hill with three people in their zorbs.
The eight of us began talking over each other, swapping stories of whose feet were in whose face during the ride, and who got the wettest.
Zorbing was amazing. It might be worth a 17-hour flight back to New Zealand just to do it again.
Beth Pond is a Senior Correspondent for Youth Journalism International. 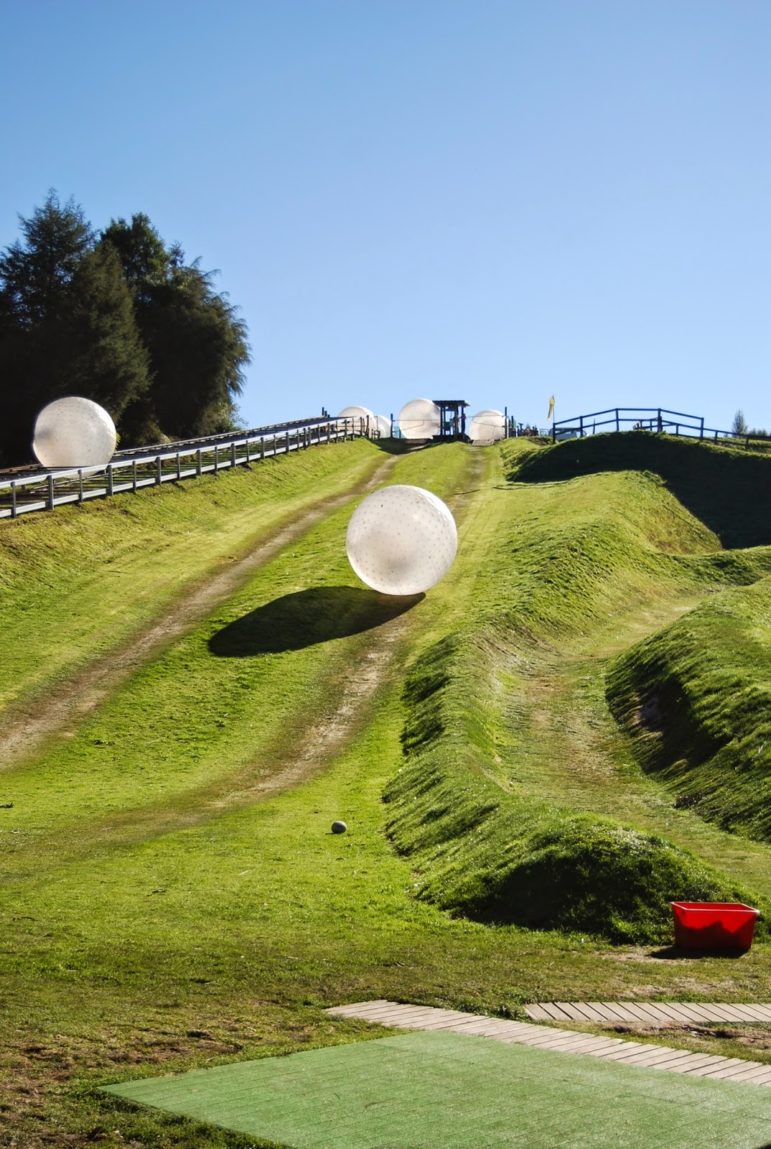 Read an accompanying YJI piece about
New Zealand’s capital, Wellington.
***
Your tax-deductible contribution can help support this nonprofit at
www.HelpYJI.org