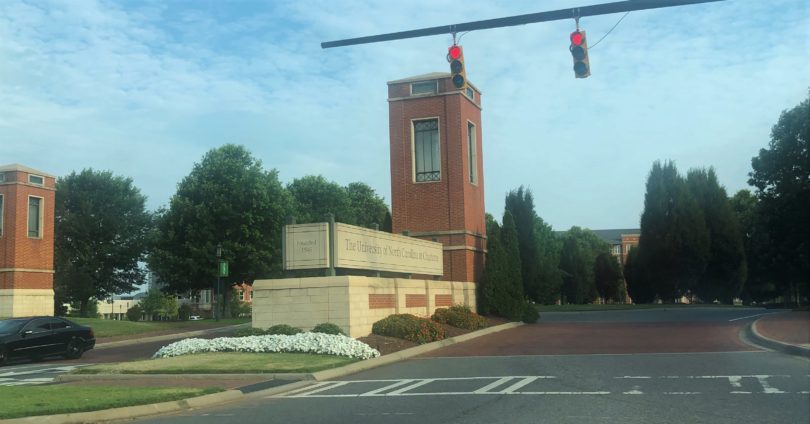 The entrance to the University of North Carolina in Charlotte. (Katie Scherner/YJI)

Charlotte, North Carolina, U.S.A. – Nearly three months since shots rang out on the University of North Carolina campus here, the shots – which lasted mere seconds – continue to impact two siblings who were both on and off campus at the time.

Jaret Arneson, a 20-year-old junior at UNCC, was at his local gym when he received the active shooter alert through the school’s Niner alert system.

Arneson, a pre-communications major, was in complete shock as he began to text out the news to everyone. He was deeply concerned for his sister Dakota Arneson, who was on campus.

Dakota Arneson, a 19-year-old freshman Nursing/Environmental Science major at the school, was in line at the Jerry-Richardson Stadium to attend a campus concert.

All of a sudden, she said, police officers were running to their cars and donning bulletproof vests, leaving her confused. There was word spreading of a shooter, and soon after, she got the Niner alert, too.

Jaret Arneson said he thought the alert came late, but both he and his sister believed that the system was effective in alerting the campus of an active shooter. She was able to leave the stadium and head for a safe spot, and he was able to text her.

Although Dakota Arneson didn’t know anything about the victims or the shooter, her brother recalled a brief encounter with the 22-year-old shooter just weeks before the incident.

Jaret Arneson explained that he saw the shooter on campus arguing with someone he thought was part of a religious group. He immediately deemed the situation odd, and said he’ll never forget that moment.

Even though he’d been off campus, Jaret Arneson still felt the impact. The shooting taught him to be more aware of his surroundings, he said, and to look over his shoulder more often.

As for his sister, she has also become more aware of her surroundings, but said she doesn’t feel  safe on campus and didn’t stay in her dorm after the shooting.

Fortunately, she was able to come home to her parent’s house.

Finding a perfect solution to this issue is nothing but difficult. Dakota Arneson said there should be a “longer, more in-depth process for people to get guns.”

Her brother, on the other hand, agreed that there needs to be change, but said he doesn’t know what it should be.

He said students “shouldn’t be afraid to go to school” and that any loss of life in a shooting is devastating. While there will be a period of grief, he said, people need to be resilient, and “bounce back.”

While the shooting at UNCC now takes a spot with many other shootings across the nation – a mass shooting in Virginia Beach took place soon after – whether things will change remains unclear.

“We’re not going to let this affect who we are as a community,” Dakota Arneson said.

Katie Sherner is a Junior Reporter with Youth Journalism International.