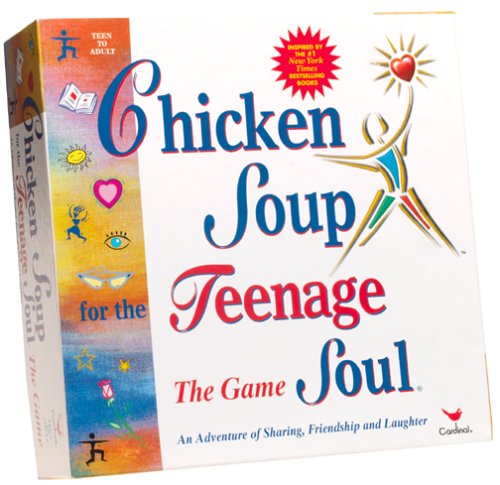 BRISTOL, Connecticut, U.S.A. — It used to be a delicious, if not terribly effective, remedy for the common cold.
After that, it became a series of sickeningly heartwarming and inspirational books aimed at everyone from dog lovers to fishermen.
That’s right: It’s Chicken Soup.
You might have thought you’d enjoyed every variation of Chicken Soup that could possibly be imagined, even by such creative geniuses as those who brought you gems like Chicken Soup for the Teenage Soul, Chicken Soup for the Christian Soul, and Chicken Soup for the Christian Teenage Soul.
But not so.
That’s right, folks, there’s more where that came from: It’s Chicken Soup for the Teenage Soul … the Game!
But this is no ordinary board game. It is “an adventure of sharing, friendship and laughter,” the sort of game where everybody wins.
In short, it’s not much fun.
In fact, it’s about as much fun as you’d expect from a game named after a dish made by boiling a bird carcass and adding noodles.
To be fair, there are people who will absolutely adore Chicken Soup for the Teenage Soul the Game. Though it says it’s intended for ages teen to adult, it may be better suited to preteen girls whose hobbies include sleepovers, painting each other’s toenails, and giggling.
None of these were among the people with whom I played this game.
But even if you might need to be a bit of a ditz to really love it, you don’t have to be to play. All you need is the four decks of cards, six tokens, and one chicken soup die included in the box, plus two to six players – preferably with souls, I would assume, though the instructions don’t make it clear whether or not this is a requirement.
The game directions consist of a bunch of cutesy references to soup, recipes, and such, along with some information on how to play the game. If you can manage to stay focused in between the groaning and eye rolling that necessarily result from reading these instructions, you’ll eventually learn the following:
The chicken soup die has different food-related pictures on its sides, each representing a different deck of cards.
Each deck has a different type of card, which will require you to share your laughter and friendship with your fellow players in one of several ways.
You may have to ask another player a multiple-choice question and anticipate their answer. There’s no “none of the above” option, so in the event that you’re asked a question and none of the possible answers is true for you, you must lie.
You might also have to write down a list of things about yourself and see if your answers match those of the other players.
The object here is to think like everyone else – being unique won’t get you anywhere, so don’t bother. You can make stuff up if necessary. And if it still turns out that nobody’s answers match yours, try sharing your feelings: “Let’s see – fun things to do on a date? Hmmm… I feel that ‘snuggling’ and ‘snorkeling’ are close enough, don’t you?”
If worse comes to worst, you may even have to tell an inspirational story. Don’t worry, though – it doesn’t have to be a true story, as far as we could discern, so feel free to feed your fellow players a pack of inspirational lies. Try including the phrase “overcoming obstacles,” and work in some adorable puppies, if possible.
If your story is lousy in spite of the puppies, have no fear. Your peers don’t get to rate it or anything – they’re just forced to listen and be inspired – so it doesn’t even have to be a good story. In the world of Chicken Soup, just sharing is enough to allow you to move ahead.
That’s what happens when you successfully complete the task given you by the card you draw – you move your token ahead the number of spaces indicated on the card. The spaces have the same pictures as the die, so on your next turn you just take a card from the stack indicated by the space you’re on.
As you navigate the board this way, you’ll not only share laughter and friendship, but you’ll also learn things about your fellow players and yourself that you never knew before. You’ll form a lasting bond of friendship. You’ll feel your soul grow wings — not of the plucked and shriveled chicken variety, but wings made of love, wings that let your spirit soar to reach out to those around you.
Either that, or you’ll get sick of the game halfway through and collectively say, “Aw, the hell with it,” like we did.
When you think about it, that unanimity in itself is evidence of some kind of emotional connection forged between us, isn’t it? Pretty heartwarming, if I do say so myself.
What do you know – next time I need an inspirational story, I might not even have to lie.