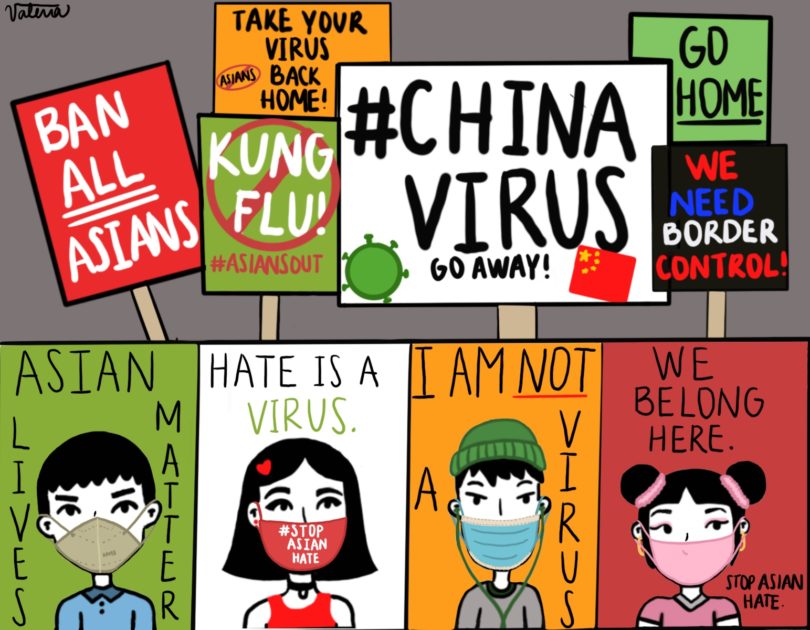 Rockville, Maryland, U.S.A. – On March 16th, a shooting in Atlanta, Georgia, left eight people dead, six of whom were Asian women. On March 30th, in New York City, a 65-year-old Asian woman was brutally beaten while the perpetrator shouted racist slurs at her. These horrific hate crimes are not isolated events, as anti-Asian violence has been on the rise since the beginning of the covid-19 pandemic.

As a member of the Asian American and Pacific Islander (AAPI) community, hearing of these recent attacks forced me to reckon with not just the growing anti-Asian sentiment in the United States, but also my identity as a Korean-American woman in this country.

Growing up in southern Maryland, it did not take long for me to realize I had to separate my cultural identity at home from the one I embraced in public.

At home, I spoke the language of my Seoul-native parents, ate the foods of their childhoods and listened to the music of their mother tongue.

At school, I worked to eliminate any trace of this identity around my peers, attempting to display only my American background. It took one of my friends asking if a text message I was sending to my mom in Korean read “ching chong” for me to stop trying to embrace my Korean heritage.

It was to the point I even considered changing my last name from “Rah” to “Ray” to make it sound less ethnic. I was in elementary school.

This partition I created between my two backgrounds quickly developed into a shame for the culture my parents taught me at home. Even today, as I attempt to reverse this mentality, I recoil at the thought of speaking Korean at school because I have been taught for years, through name-calling and stereotypes, to suppress my background.

I have no doubt that my experience is not unique, and that other AAPIs have felt themselves be branded as “perpetual foreigners” in the eyes of America.

These recent atrocities are a testament to this lasting exoticism with which people like me are seen.

History shows that when people are frightened, they look for an easy scapegoat: someone they feel is unfamiliar and foreign. During World War II, for example, Japanese Americans were thrown into internment camps to pay for war crimes entirely unrelated to them.

The fact that AAPI are being held accountable for the coronavirus pandemic today just shows a consistency with this line of thought. Even though COVID-19 is not our fault, we are held accountable because we are the easiest to blame.

Has America’s view of this entire group of people not changed since 1942? Are Asian Americans just as foreign as they were once considered almost 80 years ago?

These are the questions I consider when I reflect on the deaths of Daoyou Feng, Delaina Ashley Yaun Gonzalez, Suncha Kim, Hyun Jung Grant, Soon Chung Park, Xiaojie Tan, Paul Andre Michels and Yong Ae Yue – murdered in the Atlanta shooting – as well as the brutal beating of Vilma Kari in New York City.

The struggles of the Asian American community have always been swept under the rug. The time has come for that to end, as members of the community today fear for their own safety in the very place they call home.

America must correct its age-old discrimination against Asian Americans and now is as good a time as any.

Hannah Rah is a Junior Reporter with Youth Journalism International from Rockville, Maryland. She wrote this essay.

Valeria Vazquez is a Junior Reporter and Illustrator with Youth Journalism International. She made the illustration.

Hannah Rah is a Junior Reporter with Youth Journalism International from Rockville, Maryland.