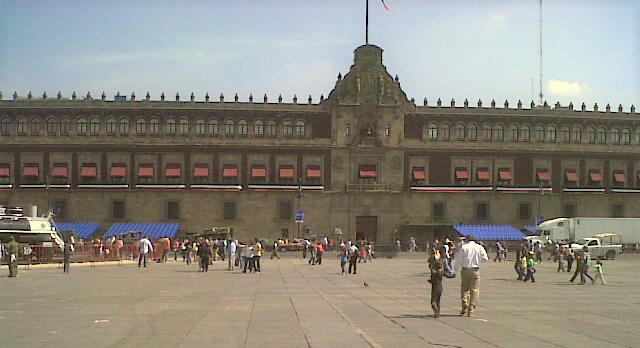 The Palacio Nacional in Mexico City where the president lives. On a wall the government erected at the site in advance of demonstrations, protesters made a mural with the names of names of women who were victims of violence. (Regina López/YJI)

MEXICO CITY – Last year on March 8th, women in every state of Mexico were protesting for their right to live.

According to the Mexico’s executive secretariat of the National Public Security System, 940 women were killed in 2020.

That must be just a cruel joke.

After the protest last year, on March 9, no women stepped outside of their homes. In silent protest, women did not go to work or school.

The essential message was, what would a day look like if there were no women?

Along with my fellow warriors, I didn’t put a foot out of my door. I pretty much didn’t do anything that day.

I couldn’t stop thinking, I can’t go to school because I have to prove a point. It seemed ridiculous, but it is an obligation if I want this situation to end.

I hope that these desperate movements will get us closer to the light at the end of the tunnel. I’m I’m exhausted from counting the times I walk out by myself and losing track of the number of times I‘ve seen signs of another girl who has disappeared.

The lack of support – or even a response – from the government is astonishing. In his daily remarks on May 15, 2020,  President Andres Manuel Lopez Obrador said, “Ninety percent of the calls that 911 receive are false, it has been demonstrated.”

He gave no details.

I’m not shocked that in his last two years as president, the number of women who were killed went from 411 to 940, according to the executive secretariat of the National Public Security System.

This year, the protests focused on a specific target. In the state of Guerrero, the candidate running for governor from the president’s political party is Félix Salgado Macedonio, a guy accused of rape by multiple women.

I can’t help but think, we can’t get hit that low.

The government’s response was to install a wall outside the president’s residence days before the March 8 protest.

Like almost everything, this is a political situation. If the protesters tear the wall down, it may be said that these women are crazy or irrational – things they have been called plenty of times in the past. But if they don’t do anything, he will be left untouched.

Thankfully the protesters didn’t have to face either scenario.

Instead, a mural was made on that wall with the names of every woman who has been killed, disappeared or raped.

I know we are at the peak of another battle, but I just want this war to end once and for all.

I’m exhausted from fighting but I must continue.

Regina López  is a Reporter with Youth Journalism International.